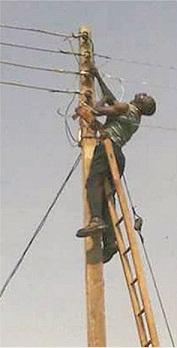 By Sunmola Olowookere
|
It was reminiscence of a case of dog eats dog when a staff of Benin Electricity Distribution Company (BEDC), Tanim Kehinde Tahiru was dragged before an Akure High Court over the death of his colleague.

The accused person was alleged to have switched on electricity in an area known as Jilalu street, Ondo, where his colleague, Adenola Sama (now deceased), was carrying out a repair on an electricity pole which led to the deceased being electrocuted.

According to the prosecution led by Barrister Charles Olafimihan, the accused person was arraigned on a three-count charge of negligence, manslaughter and attempting to destroy evidence.

According to the prosecution, the accused person was alleged to have switched on the electricity current at BEDC control room when the deceased was rectifying some electrical faults at the substation transformer after obtaining permission from the accused person who was then the operator through his supervisor.

He was also alleged of tearing the log book in which the permission granted to the deceased to repair the fault was recorded.

However, Tahiru had entered a “not guilty” plea when the charges preferred against him were read to his hearing.

An eye witness at the scene, Joseph Oyebade, testifying before the court, stated that he was not a staff of the company. But that he was invited to transport the deceased home after the work.

He testified that he met the deceased and the accused person at the scene when he arrived there and that the accused person had left soon thereafter with the intention of going to put off the electricity in the area from their office.

According to him, the deceased had decided to climb the pole after receiving a certain call and muttering, “it seems the light is off” climbed the pole to start rectifying the fault.

The witness, however, stated that he could not ascertain whether the call he received from the BEDC office told him that the light was off before he climbed the pole.

He further testified that the deceased suddenly fell to the ground and was unconscious.

According to the witness, all medical attempts made to rescue the deceased proved abortive as he gave up the ghost.

Under cross examination by the defense counsel, D.A Abdulquadri, the witness admitted that the deceased was not putting on any protective glove, boot, clothing or safety belt when he climbed the pole and attempted to join the wires.

The case was thereafter adjourned till April 24, 2019 for continuation of hearing.