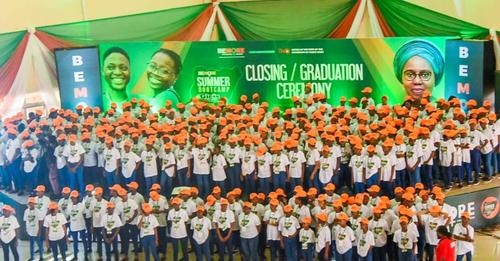 The Governor of Ondo State, Arakunrin Oluwarotimi Akeredolu has described BEMORE Empowered Initiative as one of the largest girls’ project in Nigeria.

He made the remarks during the closing ceremony of this year’s BEMORE Summer Bootcamp  held at the Federal University of Technology  Akure (FUTA) where 388 girls who have been  equipped with tools in Solar Technology, ICT and other entrepreneurial skills graduated from the two weeks programme.

Represented by his Deputy, Lucky Aiyedatiwa, the  Governor affirmed that  BEMORE Empowered Foundation had equipped girls towards maximum exploitation of their potential, while thanking the  founder and her team for partnering his administration in closing gender gap, towards actualisation of its REDEEMED Agenda.

He reiterated the commitment of his administration to continually support and partner initiatives that were geared towards the betterment of the citizens.

Addressing the graduands, Akeredolu charged them to go and reproduce themselves with the various skills they have acquired in the camp and become good ambassadors of Bemore in the society, saying they are seeds sown into the world to make changes.

Also, the BEMORE initiator,  Arabinrin  Betty Anyanwu-Akeredolu, charged the girls to utilize the skills acquired to change the society’s perception of girl-child urged them to transform the world as a special breed without greed by reciprocating the gesture received through the initiative and give back to the society that produced them.

“My dear techy girls, I want you to take home the fact that the ‘the future is female’. Gone are the days you would be made to play the second fiddle role because you are a girl.

“You are too talented and endowed to be ‘materials for exports’. Bemore Girls are not cheap! You must go ahead and do rare exploits,” she said.

Chairman of the occasion, Dr. Jimoh Ibrahim, CFR, charged the graduands, as leaders of tomorrow to take education seriously in this era that world economy is competitive, noting that they’ve been supported with innovative materials in the camp which should motivate them to prioritize education.

On institutionalisation of Bemore in Ondo State, the Chairman described it as a good thing, and assured that establishment of Bemore institute is achievable. He, therefore, launched the building of the Bemore permanent site and assured of his readiness to oversee fund raising for it.

The Special Guest of Honour and  Minister of Science and Technology, Senator Olorunnimbe  Mamora, said that he was inspired by the story of the BEMORE Founder. He encouraged her to remain unperturbed about the sustainability of the programme, saying with right scope, people of like minds would rise to its continuity.

He commended the Bemore initiative for promoting girls’ interest in Science Technology and Mathematics, (STEM), which he described as the bedrock of industrialisation.