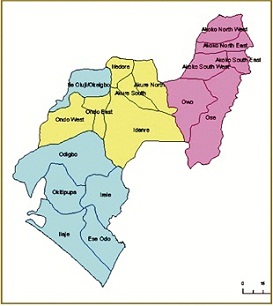 By Ayodele Fagbohun
|
The importance of local government in fostering a democratic way of life in promoting good government and in sustaining the state and federal governments cannot be over-emphasised”…Chief Obafemi Awolowo.

Contrary to the misconception, prevailing general practice and the norm that local government administration is the hot bed of committing sharp practices and other financial crimes to steal and fleece the national wealth, the first Premier of Western Nigeria, the late sage Chief Obafemi Awolowo posited in his book Thoughts on Nigerian constitution that local governments should serve as the foundation on which the state and federal governments rest.

The unique pride of place occupied by the effective deployment of local government administration in the first and perhaps second republic politics was unassailable which provoked the envy of the people in the remarkable general improvement and enlightenment at the grassroots’ of the countryside.  Various state governments across the federation, the Western Region as a case study and point of reference ensured the empowerment and full democratization of local governments.

All policies and programmes of Obafemi Awolowo led Action Group (AG) administration were given fillip and impacted tremendously in every nook and cranny of the region.  They all as usual percolated to the grassroots without any noticeable discrimination in view of the people’s natural habitation in the remotest past of the region.

For instance, there was exponential agricultural revolution in the West that changed the traditional and pedestrian method of farming.  This gave birth to coteries of farm settlements christened “Opticom Services” located in specific villages and farm steads which enjoyed comparative advantage in certain items of crops  production.  This transformed, ensued conducive and enabling environment for the rural dwellers to attain relative comfort and high productivity in their various agricultural endeavours.

In the area of education, the Ministry of Information, Home Affairs and Local Government was streamlined and firmly entrenched in the headquarters of each local government area in educating, informing and entertaining the otherwise rural folks on the new developments.  The adult education was prioritized and this in no small measure confirmed the maxim that education is life and the potent tool for change.  The rural/urban drift was considerably reduced to the barest minimum or virtually non existence.

According to Chief Awolowo in his book, he vividly illustrated the local government that can be well accessed and small enough for a conscientious councillor to have regular, personal contact and touch with every man or woman, boy or girl.

For the practice of democracy to grow, flourish and replenish the earth, it must commence operation in earnest form the ward or village level. The local governments are the architectures for the training in public management, finance and for participation in public life; for many more public spirited men and women to advance themselves politically and aspire to higher realm of service at the state or federal level.

To the utter dismay and bitter disappointment of the people who wish Nigerian democracy well, the fortunes of local governments nose dived probably in consequence of the long military dictatorship and interregnum in the public life of the country.  The local government reforms (1976) which General Obasanjo’s military junta gave to the democracy loving people of Nigeria was a fiasco.  Rather than being a blessing to the country men and women, it turned, at the end and it deleterious effects, to a curse owing to the command structure and the iron curtain rule of the military.

There was flagrant disregard of the peculiar and intrinsic characteristics and the diversity of the nation that every ethnic national geo-political group should be given unfettered freedom to fashion the modus operandi of local council administration suitable for each of the national group.  It is calamitous and shall be more devastating in the end to foist  by military fiat the same pattern of local government administration on the whole country given her federal character and structure.

The military incursion in the politics of this country is a complete grave mis-adventure, rancorous bane on the economy and giant leap backwards in the growth development and practice of local government.  Anyway, this is not an auspicious time to lament and regret over our past errors and naked injustice done to ourselves.

All efforts must be geared to redress the monumental and age long wrongs inflicted on the psyche of the local people unabashedly deprived and shortchange of the rich dividends of democracy courtesy of the non performance to the criminal nejglect and total abandonment over the years of the local government system across the country.

The die is cast as far as the issue of local governments are concerned.  In this connection, I speak for Ondo State where plans are afoot to create more local council development areas to complement and increase the momentum of activities statutorily allotted to supposedly dynamic tier of government but now bedeviled with unprecedented corruption, corrupt practices, venality and lack of accountability.

This is to lend credence to the constitutional provision that state is recongnised in law and thereby accord imprimatur as the federating unit.  It further clarified that status of local governments at the pleasure of state and necessary adjuncts to the cause of good governance perused by the state.

Here we go, (a) the consideration and the making of recommendations to a state commission on economic planning or any similar body on”

(i)            the economic development of the state, particularly in so far as the areas of authority of the council and the state are affected, and

(ii) proposals made by the said commission or body.

Now, the nitty-gritty of the functions of the local government council as expressly stated in the constitution.

The functions of a local government council shall include participation of such council in the government of a state as respects the following matters:-

From the foregoing, it could be argued without being frivolous that functions assigned and expected local governments are so weighty and onerous which must be saddled with only highly public spirited and self abnegated patriots; committed to the transformation and rapid progress of the country side.

It is not a task to be given and handed over to the present corp of professional and venal politicians gallivanting all over the place to steal and further impoverish the lots of the downtrodden.

For the mocking narratives about how the affairs of the local governments are managed or mis-managed not only pathetic but despicable about the ostentatious, unbecoming and arrogant lifestyle of political functionaries and local government’s staffs’ collaborators leaving the entire populace called upon to serve, as hewers of wood and drawers of water.

Perhaps the ugly scenario provoked the ire of former Governor of Central Bank of Nigeria (CBN) Chief Joseph Sanusi when he said more local governments are not economically viable though some people believed they were politically desirable.

“What is happening now is that the resources are just not adequate to finance many administrative structure and most of the structures are not viable” Sanusi stressed.

A renown professor of Law and Chairman, Presidential Adversary Committee Against Corruption, Professor Itse Sagay recently took a critique on local governments in the constitution.  The jurist submitted that local government structures should be scrapped across the country as they are not recognised in the constitution as federating units and that their functions should be taken over by the state government.

However, the niggardly deployment of public funds to areas of need and attention like education and the simultaneous misapplication of national wealth culminating into extravagant, profligate spending and extreme waste of the scarce resources and the nation’s assets.  The tardiness in office by some public functionaries in office.

All this amongst maladies afflicting a large segment of the nation’s rulers at the helm, constitute major drawbacks which invariably hamper our progress and onward march to easily become within a foreseeable future an agro-industrial giant in Africa and cynosure of the black race.

Hence, the state must do the needful to ensure local governments serve the people at the village level.

The committee on Ondo LCDAS presided over by Mr Lanke Odogiyan with Dr. Deji Akinwalere as secretary is duty bound to provide the working formulae on the constituencies or local government areas that are contiguous having common interests consanguinity, long standing and harmonious relationship but manifestly seen to have suffered neglect and marginalisation should constitute the new LCDAS.  Other unifying factors should also be considered for the local council areas to be viable and self sustainable.

Only the retired public servants or public affairs’ spirited volunteers should serve as full-time chairmen/Chairpersons of the LCDAsS, and be placed on salary not lower than Grade Level 12.

Whilst the councillors are to be on part time and be entitled to only the sitting allowances duly enjoyed by serving public officers on Grade Level 08.

The earlier our political office holders realise that public office is purely for patriotic and selfless serve to motherland; and not to amass ill-gotten wealth and put the public at a disadvantage, the better for the economy and the future of this country.