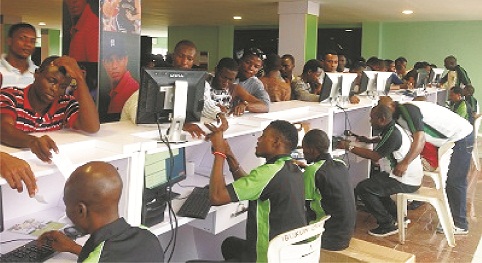 By Mary Agidi
|
Gambling or betting is a sin, says my pastor. This belief made me to transfer my hatred to sport betting. I have male friends playing sports betting in Nigeria like Nairabet, Betnaija among others, but I used to see them as committing sin as I have characterized it as an illegal deal.

Meanwhile, despite my hatred for sport betting, I was vexed with my younger brother, Tunde, for months for mismanaging the sum of N68, 000 which he won through Betnaija last year.  Why should I care about the money he won through a means I detest? I had scolded him months earlier to stop sport betting which he said involved just a token amount of N100.

Cheerfully, I left my room for his, upon receiving the information from another brother of ours in Ado-Ekiti that Tunde had won some amount from the English Premier League betting. I approached him in an unusual friendly manner and I asked, “is it true you won this amount of money? And he replied yes, but that he was yet to claim the money.

Tunde needed an Android phone then as a young secondary school graduate, seeking admission into the University; knowing his target, I summoned him the next day to guide him on how to judiciously spend the money, and this time around I had forgotten my hatred for sport betting. To my amazement, he ignored my advice to buy a lesser Android phone that cost  N31,000, and went ahead to buy the one he suggested in which I had opposed; he bought a phone of N48,000 out of N68,000 betnaija money he won.

I was furious and vowed to deal with him for disobeying me.

Mr. Tobi Olumide(Not real name) is now operating his own laundering service in Ijapo, Akure having won a huge amount of money from Betnaija which he used to purchase a washing machine, being a one-time laundering officer in a big hotel in Ijapo Akure.

During the recent economic recession in Nigeria between 2016 and 2017, especially 2016, the testimonies I got from friends, families, and colleagues on how they survived the recession with Betnaija money, got me curious as to whether my opinion about sport betting was correct or not.

Are sports betting and gambling the same? Does it add to the economic development of our country considering those that have benefitted from it? Is it in advantage or disadvantage of our young unemployed teeming youths? Is government encouraging it since it is a widely recognized act?

According to him, the tax generated from the activity is being utilized by other foreign countries to improve sporting activities but the reverse is the case in Nigeria.

His words: “Sport betting is legal especially for adults, and has positive impacts on the economy. If well utilized, it would help in reviving our dilapidated sports structures, to sponsor sporting events, and take care of the welfare of our athletes. Lots of unemployed youths now see sport betting as a means of livelihood where they will predict matches with little cash and get more to feed themselves, hereby shunning social vices”.

To him, it has helped the nation’s economy in term of employment opportunities as youths are employed as agents or attendants at the betting centres, and also improved cash flow because of the daily cash transactions though the activity.

In his contribution, the Executive Secretary of Ondo State Pools Betting and Lottery Board, Mr. Akinya Olubodun said gambling and betting are somehow related but not really the same.

According to him, betting is regulated and backed by law while gambling is not. He noted that there is an age limit to person who can participate in sport betting, which is 18years and above.

Olubodun hinted that the activity is a major contributor to Internally Generated Revenue as the state was able to garner over N25million in 2018 through regulation of betting centres. This regulation he said was in form of centres registration and licence fee.

To him, religion has made some Nigerians to see sports betting as an act of irresponsibility which shouldn’t be encouraged, noting that it is widely recognized and serves as a means of creating jobs.

“Our regulation covers the fact that there is an age limit, it is illegal for someone below 18years old to bet. We move round the betting houses to ensure that the age limit is regulated; then if you partake in the betting we ensure that what is due to you is given to you.

“We are very religious in this part of the world, a lot of people will tell you that lottery is not good for the people of God, but it is a way of revenue generation and creating employment. So many people that operate as agents and promoters of the game are sustaining themselves through this activity and are paying their dues to government,” he said.

He used the medium to reveal that the current administration in Ondo State is putting a lot of focus on lotto and betting activities this year with a target of a billion naira as IGR and also provide avenue for citizens to participate in raffle draw where a lot of gifts like cars and electronic gadgets would be won.

Speaking on the social implication on the youths, a sociologist, Mr. Tayo Olademehin said, “gambling and betting is as old as the world itself, what we have  as betting today transformed from the crude way of life of the earlier people. Pools and betting today are being promoted by love for football and other games.

“Betting, with special reference to Nairabet or Betnaija have variance of social implications  which are inherited by the society. Apart from the economic implications, the social implications included but not limited to the following, since social problems are seen as social conditions affecting a significant number of people considered undesirable”.

According to him, betting promotes crime, as it involves two or more individuals and the age range of the players are majorly youths who are supposed to be the productive populace of the society.

He said: “When they come together at the betting shop to play games, they also plan other anti- social activities such as rape, robbery, arson, public fighting and thuggery.”

He added that the youths waste the productive hours of their daily lives forecasting the game. “At the long run they became useless to the society because it takes grace and divine intervention to leave the habit.”

“It makes them suffer from psycho social problems, euphoria, get rich quick syndrome, mental retardation, depression whenever they loose money to the game.

“Betting today promotes drugs addiction, significant number of players are drug addicts and drunk. It tends to shirk the financial responsibility of the players (those that are parents). They abandoned their domestic responsibility at home front. There have been cases of children stealing their parents money to pay for the game,  he added.

He therefore corroborated the fact that betting contributes to the economic development, saying, “betting doesn’t come without having some positive implications, at least it provides job to the operators”.