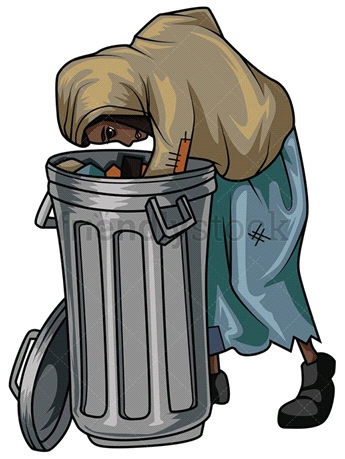 They moved about with makeshift iron mini trucks, at intervals, they will shout “condemned iron”. They hit the side of their makeshift truck with a rod also at intervals to announce their passing for potential customers that are interested in patronising them.

They are called “scavengers’. However, our neighbourhood people call them “iron condemn’. Their work is to gather iron condemned materials for possible recycling.

The iron mini truck they pushed about is full of myriads of items; some picked from the ground, some bought from thrifty owners and others stolen from careless owners.

Unaware of their nefarious activity, residents treat them with pity and sell abandoned iron materials to them for a pittance. People see them as unfortunate people that had to scavenge at dumpsites in order to feed themselves and their families.

They search dumpsites and backyards of houses too and gather iron materials as they go. Even when they roam the neighbourhood somewhat aimlessly, no one takes them to task.

As pots and pans seemingly grow legs and walk away from their owners’ backyards, no one readily suspected them. They were seen as defenseless and innocent.

Due to a recent development in our neighbourhood that was like an eye opener, residents have grown to be wary of these people because of their underhand practices.

This came to be as these scavengers turned thieves grew bold and gave themselves away when one of them tried to make away with a small generator at the back of a building.

Ill gotten proceeds from the pots and pans were no longer enough and he coveted the more gains the stolen generator would fetch him.

It was the smallest brand of generating set known as “I better pass my neighbour” in Nigerian parlance. The young man who was the proud owner had just put it off and was waiting for it to cool off before he would take it in.

The scavenger was rummaging on the dumpsite beside the house and he looked surreptitiously up and down the street. Then he deftly swooped on the generator, unplugged it and quickly put it in his truck. He covered it with an iron sheet and made to move away when a stern voice halted him.

Unknown to him, one of the neighbours of the robbery victim was watching him from the window all the while he thought no one was home.

He was frightened as he realized that he had been discovered and he tried to run away but the neighbour raised an alarm and he was easily caught and overpowered by fierce looking young men.

They nearly beat the living daylights out of him before a good Samaritan took him from them and they followed them to the police station.

We now realized that these scavengers have for long added stealing to their business. When they searched for iron condemnables to pick, they probably also stole our pots from our backyards.

Unwashed Amala pots left to soak and iron trays and large frying pans used in sun-drying had begun to disappear. Now we realize where they had disappeared to.

Residents have grown to be wary and we watch any scavenger that comes around with eagle eyes. The men will shout on them to move quickly and leave the neighbourhood.

As our neighbourhood becomes too hot for them, it’s likely that they will move to other unsuspecting neighbourhoods.

Friendship of dog and Leopard’s cub

Who becomes ‘first wife’ when manreunites with baby mama after marriage?