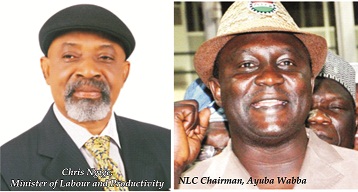 By  Bayo Fasunwon
|
The week past has been very interesting. Apprehension, fear, speculations, debates, and resolutions inhabited various homes in Nigeria. The Nigeria Labour Congress (NLC) had threatened to embark on an industrial action that would shut down Nigeria, if their demand for a N30,000.00 (about $USD84) monthly salary is not declared and approved as the minimum monthly wage for any Nigerian worker. The Academic Staff Union of Universities (ASUU) on the other had neither threatened nor gave any notice of its intent, but rose from its meeting to declare a total, comprehensive and indefinite strike. Strike averted, strike commenced and strike expected.

The general perception of strike is an action of inaction taken by employees against their employers. It implies a stated intention and action of boycott of work in order to press home a demand on government, organizations, or employers by unions of employees. These perception, though corrects hides the latent force of a strike action. A strike in its real sense is forceful and painful penetration of the strongholds of employers by employees. It is intended to bring about a forceful contact between the prey and the predator. It is an action embarked upon to force a stroke of Goodluck upon the aggrieved party. Simply put, a strike occurs when employees refuse to perform their duties, in order to force government, organizations, or employers to perform their duties.

Right from pre-colonial times, to the days of Pa Imoudu, Assisi Asobie and now, strike had often been the last straw that broke governments stiffened necks. In religious terms, strike could be likened to the ten plagues that forced Pharaoh to accede to the demands of Moses. Strike has been successfully used as a weapon in Nigeria by NLC, TUC, PENGASSAN, NUT, NBA, NMA, ASUU, and even the Police Force to get a better welfare package from the public and private sector. Strikes in Nigeria have been likened to the transistor radio. While people ask why many would hit a transistor radio when it is not working fine others have asked why the radio begins to work well, after it has been hit.

The averted NLC strike was predicated on the demands of Labour for an upward review of the minimum wage which had stagnated at N18,000 ($USD50) for more than six years. The argument of Labour was that, the Federal Government had in consonance with State Governments neglected the agreement to review the minimum wage every five years. Furthermore, they have argued that Government had increased the living costs of the average Nigeria worker by increments in the costs fuel pump price (Petrol, Kerosene, and Diesel) school fees and other essentials. These had also culminated in the price of consumer goods in the market place without an attendant enhancement of the purchasing powers of the workers. Added to this is the devaluation of the nation’s currency thereby making imports costly without the provision of locally made affordable and accessible consumer good for the workers. These have worsened the living conditions of the workers.

The school of thought that hailed the governments draconian rule of no work no pay without endorsing the no pay, no work dogma have questioned Labour incessant demands for more pay without consideration for the poor economic situation of the country in these trying times. In their opinion, government should not be in place to pay only workers salaries. They argue that workers take home pay takes more than 70% of governments expenditures. Thus, any government that wants to satisfy the cravings of workers would be left with nothing to embark on infrastructural developments that would benefit the entire populace. Workers have also not taken into consideration that many State Governments have not been able (not that they had willfully refused) to pay the salaries of workers, at the old rates, for several months. Workers demand is therefore insensitive, selfish, and misplaced. They also frown at Labours hard stance against the retrenchment of the bloated Civil Service in order to reduce the overhead costs of governance.

These emergent economists have also argued that increment of salaries of government workers would trigger a high level of inflation, such that the increment would be of no value at the end of the day. These, they explained would become a reality because workers in the private sector would also have to pay their workers the legitimate minimum wage, thereby increasing the cost of production of manufactured goods, private school fees, transportation costs and consumer goods; as all would want to benefit from the largesse of the new minimum wage. In addition to these, they have also argued that salary increments would neither improve service delivery nor put an end to the agitation of workers. Many others have also prophesied unrests, retrenchment, and underdevelopment in the various States that are being coerced to kowtow to new minimum wage fiat.

On the other hand, the proponents of improved welfare package for workers have also presented their convincing arguments for more pay. In the first instance, a picture of Nigeria is painted to show a country that does next to nothing for its citizens. To them, the dictum that implores do not ask what your country can do for you, but what you can do for your country does not hold water in Nigeria. They argue that Nigerians, especially the workers, have been working for Nigeria, without reciprocity from the nation. Retirees are treated as enemies of the state; their entitlements unpaid; harassment during operation-show-yourself, their educated children unemployed and neglect in times of ill health, despite their unrecognized meritorious service to the nation. Thus, before retirement, the workers believe that the bird would only fly with what it is able to eat, while working. Hence, the demand for a better pay, when they are able to utilize it to procure a better future, before it becomes too late.

In Nigeria, they also argue that an average worker in Nigeria is the employer and hope of bricklayers, market women, telecommunication sector, and other workers in the informal sector. Therefore, when the worker is poor, the informal sector is poor. An average Nigeria worker provides his accommodation, security, water, transport, repairs roads, procures electricity, pays his parents gratuities and pensions, pays for his childrens and dependents school fees, clears drainages, provide health care, buries the dead and the list is endless. The question they ask is what does government even do for the citizens? All these services answer only to money, which translates to salaries for government workers, as they are disallowed from engaging in other businesses. Therefore, when the salary is inadequate, many suffer.

Furthermore, they argue that, increment in the cost of services (fuel, school fees, exam fees amongst others), culminating in the increment in the prices of goods in the markets; government policies on imports; privatization of government corporations, without better service delivery; infrastructural decays; unaccompanied by palliative measures to the populace; the wicked but deliberate withhold of workers salaries, were the real triggers of inflation, corruption and underdevelopment in the nation. To them, salary increment is not a desire, but a necessity.

Based on current realities, the average Nigeria worker with four children needs on a monthly basis

If accommodation, health care, school fees, and others were added, the cost of living would be hysterical. Therefore, even the N 30,000 minimum wage is nothing but manageable food and transport allowance for the least paid worker in Nigeria.

First, given that government (as claimed) has reduced the quantum of importation into the country, it is safer for the country at this time to re-value its currency. The Nigeria currency is too undervalued to benefit from the advantages of devaluation. Devaluation is only profitable to an exporting country, which Nigeria, save its oil, and few goods, is not. It would there be proper for Nigeria to enact and implement a policy (after this minimum wage) that would improve the value of its currency. This revaluation would in the first instance reduce the level of inflation and enhance the purchasing power of Nigerians, and boost the patronage of locally produced goods and services. I propose that the countrys currency should be revalued upwards by 10%. Hence, goods, which had hitherto cost N1000 would cost N100.

In addition, Government should declare state of emergency on infrastructures, especially on the countrys roads. Bad roads do not enhance the movement of capital goods from interior to the markets, thus increasing their costs. Bad roads also increase time spent, and maintenance cost on vehicles, thereby increasing living costs. Added to this is the need to improve in the provision of light, water, and housing. Nigerians are always ready to pay for available and functional services. When a worker does not need to spend much of his earnings on the procurement of these essentials of life, which government can provide, then the purchasing power would increase, and help in contributing to the development of the informal sector, thereby boosting the economy and thus providing more employment opportunities.

Added to these, is the appeal to government not to push their responsibilities on the citizens who are already groaning under the burden of excess luggage. Government need to give retirees their due, enhance security of lives and properties, and curb corruption. The monies to do all these are unfortunately and illegally in the hands of a few who see the opportunity of availability of unused funds siphon such to private use to the detriment of the Nigeria populace.

On a final note, I would like to align with ASUU on their demands for better funding of the educational sector. From the little calculations above, the least paid worker cannot, without corruption afford good education for his children. Most government schools from the primary schools to the tertiary institutions have been starved of funds, thereby preventing them from giving quality education to the children of the least and average paid worker. Many mushroom schools and Universities have erupted all over the nation, producing educated illiterates who are expected to turn the fortunes of this nation around. One cannot give that which he possesses not. South Korea is a way ahead of Nigeria, because they got their education on the right track. Right funding of education is the step in the right direction for development in this country.

Finally, the Nigeria government needs a change of reasoning and ideology. Strikes could be avoided if the needful is done at the right time. What a nation loses in a strike cannot be regained easily after the strike. I dream of a government that would honour agreements, that would increase salaries as at when due without making noise; that provide health facilities and improve education without the Unions singing:

We shall always fight for our rights!