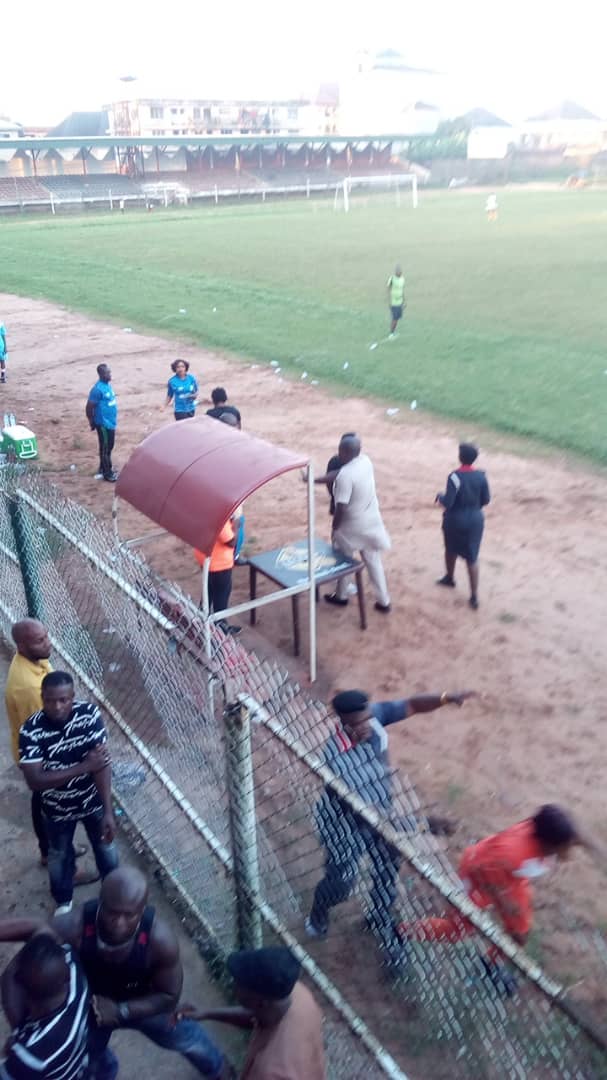 By femi atolagbe
|
It was bizzaire and shameful acts in Umuahia Township Stadium as hell was let loose by officials and fans of Abia Angels when they descended heavily on match officials, Sunshine Queens players and their officials by beating them mercilessly with planks, irons, stones, destroyed their camera with memory card.

According to the Sunshine Queens media Officer Mr Mike Akintunde, who narrated the ugly incident to newsmen in Akure the State Capital , via whatshapp message from Umuahia stadium .

Said the must win match between Abia Angels and Sunshine Queens played in the Umuahia township Stadium Abia State , started on a good note with the home team (Abia Angels) dominating the game in the early stages, the first 45th minute ended in goalless.

In the second half of the encounter Sunshine Queens FC showed some class especially in the midfield but were unable to get a goal ,until Abia Angels second half substitute Favour Emmanuel scored from three yards to give the home team the lead .

Things went awry in the 75th minute of the game when one of Abia Angels fan ran towards the technical bench of the visitor (Sunshine Queens FC) and sudden disappearance of match balls and ball boys at the Stadium.

About five ball boys started the game but suddenly it became two in the 75th minute , the match commissioner intervened and normalcy returned to the bench of  both teams

Aminat Yakubu equalized for the Sunshine Queens in the 80th minute.

Minutes later an official of Abia Angels threw caution in the air when he started, throwing stones, bottles of water at the visitors coordinator and the team’s secretary who sat at the VIP lounge while the officials of Nigeria Security and Civil Defense Corps (NSCDC) looked other side.

After two minutes added time the Kogi born Mariam Usman who is the central referee signal the end of the game as the match ended in 1 -1.

After the referee had signalled the end of the game same Abia Angels official named Ugochi Philip took laws into her hands by attacking Sunshine Queens officials with planks ,irons and stones , other irate fans ambushed the central referee  who ran for her dear life from the center of the pitch to the Stadium gate with the Reserve Referee (RR) who stood by her while she was assaulted and harassed .

As if that was not enough Ugochi Philip in company of other irate fans gave Sunshine Queens camera man the beating of his life with sticks and other objects , the camera man Segun by  name was held hostage for about 36 minutes before he was rescued by sympathisers , seven NSCDC officials present at the stadium never made attempt to curb the violent acts .

After rescuing him , he was rushed to Federal Medical Center Umuahia where series of tests were done to ascertain the level of damages done on him by his attackers .

The Chairman pleaded with Sunshine Queens officials not to take the matter up.

It would be recalled that Abia Angels penultimate week picked a point in Ogbomosho without any protest or molestation while Amazons picked a point and they left Ondo Sports Complex safe.