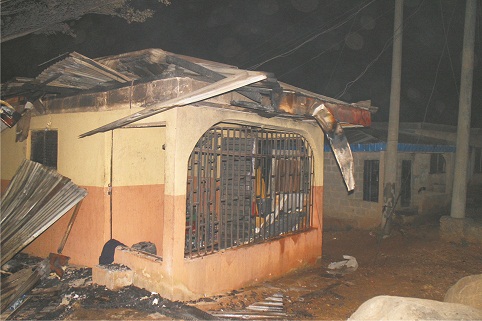 By Bisi Olominu
|
It was a black day in Akure on Wednesday  at abot 7.00pm as many promises were shattered and hope lost when a truck loaded with premium motor spirit (PMS) exploded and killed four people among whom was a promising toddler.

The victims never thought their  lives  would come to an end  abruptly.   They had  dreams of making it to the end of this year, but  the vision  got aborted within a twinkle of an eye, as an  unfortunate tanker accident puts a sudden end to their promising dreams. Their dreams were shattered  in Akure, the capital city of Ondo State as a petrol tanker carrying 33,000 litres of diesel fell at Shagari Village junction on Akure-Owo expressway, killing them with  the  toddler.

The incident occurred few metres to an NNPC petrol station as the tanker spilled its content on the road and later caught fire, burning no fewer than seven vehicles.

It was gathered that a commercial bus and six private cars, as well as many motorcycles, two residential houses and many shops along the road were also affected.

According to an eyewitness, the victims, whose identities were yet to be  known   were occupants of the burnt vehicles who were trapped and burnt inside the affected vehicles.

“The tanker was on a high speed when a Toyota Corolla car suddenly crossed the ever busy Onyearugbulem junction, during which the tanker driver  while  trying to avoid hitting the car, swerved off his lane and  suddenly  fell on the car and caught fire immediately.”

The eyewitness added that the inferno had started several hours before the men of Ondo State Fire Service arrived the scene to put it out. He added that some men of the state police command and the men of the Nigeria Security and Civil Defence Corps (NSCDC), supported sympathizers to minimize the effects of the  inferno  and casualties.

Speaking to The Hope on the incessant accidents at Onyearugbulem Junction, a mechanic, Raufu Oladejo called on the state government to find lasting solution to carnage on the road.

According to him, “it is always hectic around hero when school children are going to schools in the morning and coming back home in the afternoon.

“Many lives have been lost at this junction. Some school children have died unjustly at this junction. The population of those coming from the main town going towards  Shagari Village is much and when vehicles struggle for space at the junction, this kind of thing usually occurr.

“Those of us  residing around at this ever busy road are calling on the state government to stop this carnage immediately. Something urgent must be done to avert this avoidable accident”.

In her words to The Hope, Mrs  Bosede Ojuolape blamed the incessant accidents  on the road   to over speeding and  on the part of  the drivers in obeying traffic rules. She said that most of the tanker drivers are lawless, reckless and see those driving some cars as those that can be trampled upon.

“They embarrass small car owners with their heavy horns that many become jittery and don’t know what to do immediately on the road. She therefore called on the state government to find urgent solution to hazard at Onyearugbulem Junction, stressing that many times fatal accidents had occurred at the  scene.

To Mr. Tunde Fajimbola, what that place needs urgently is a fly over that will connect Onyearugbulem Market end of the road with Shagari Village.

“If this is done by the state government, accident will stop  since vehicles coming from Akure city end of the road and those coming from Shagari Village end of the road will be using the fly over, decongesting vehicles plying the express way , thereby reducing the incessant carnage at the Junction.

“The motorists coming from Shagari Village and the outlets are voluminous, even those joining from the various communities and working from the capital are many.

When they struggle for passage of way, it is sometimes fatal, the reason urgent attention should be paid to this road to avert further accident.

Pastor Pade Olalusi of Anchorite Church, Irese, while speaking with The Hope called on the state government to pay proper attention to accidents that always occur at the place.

He added that many lives had been lost at the Junction and promising dreams shattered.

He said that the state government should think of constructing a flying over from Akure to join Shagari road, thereby easing the congestion on the main road.

“It is always hectic for school children and motorists in the morning, mostly when the Road Safety members are not on ground. Even when on ground and using the junction to check vehicles particulars some tanker drivers are somehow dangerous.

“This unwarranted and avoidable deaths must stop”.

He prayed for those who lost their lives in the inferno and also their families.

Meanwhile, Deputy Governor of Ondo State, Hon. Agboola Ajayi,  during his visit to the scene of the fuel truck explosion accompanied by the Chief of Staff to the Governor, Chief Olugbenga Ale and the State Commissioner for Works, Rt.Hon. Taofiq Abdulsalam, described the incident as sad and unfortunate.

The deputy Governor, who arrived at  the tragic scene at exactly 8.32pm also commended the emergency  team for their quick response, which according to him prevented the truck loaded with 33,000 litres of diesel from causing more havoc in the area.

He particularly lauded the officials of the Nigeria Security and Civil Defence Corps, Nigerian Police, Federal Road Safety Corps and workers of the state ministry of work, who were at scene to prevent more damage.

He also directed relevant government agencies to ensure the immediate removal of all the burnt vehicles from the road ,so as, to open it up again for traffic.

He assured the people that the government will put measures in place to mitigate such incidents in the nearest future.