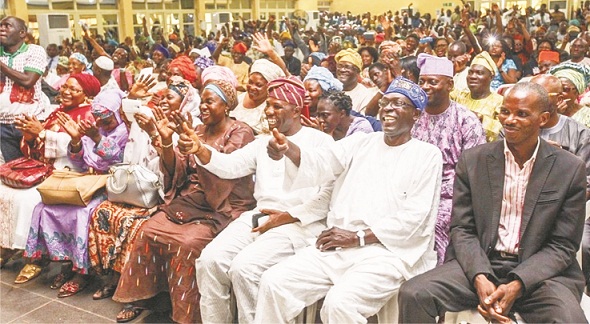 By Ilemobola Michael
|
More than 12 months before February 24, 2017, the day Governor Oluwarotimi Akeredolu (SAN) assumed office in Ondo State, civil servants, generally regarded as the engine room of development, were moody and their self-esteem badly battered. As observed by two public affairs analysts, Mr. Gboyega Alabi and Mr. Ropo Adebayo, the workers were disillusioned and their morale dampened. This resulted to frustration, apathy and serious confusion, as many of the state civil servants could not eat a day meal let alone pay their children’s tuitions.

The workers’ uncertainty became so pronounced to the extent that they began to operate under serious suspicion with their colleagues and superiors. They were exposed to grave insecurity because the then government of Dr. Olusegun Mimiko seemed to have lost focus on his statutory mandate of promoting the workers’ welfare. This ostensibly led to the paralysis of the state economy as artisans and market women depended on the civil servants for survival.

A textile trader, Madam Juliet Makinde, who prays that may Ondo State never experience such a despondent period in its political history, nearly closed shop during the period. Like her colleague-traders, her textile business depends solely on regular workers’ salaries for survival.

Available records revealed that the salaries paid by the immediate past government before it vacated office were not paid to the disenchanted workers as at when due.

Pensioners were hardest hit by the ugly development. The senior citizens’ hope to enjoy their retirement as fulfilled old men and women, who had used their youthful energy to creditably serve their state, was dashed.

The state chairman of the Nigeria Union of Pensioners, Chief Raphael Adetuwo, painted the scornful treatment allegedly meted out to the senior citizens by the immediate past government.

“Governor Akeredolu has been able to grant the leadership of Ondo State Nigeria Union of Pensioners (NUP) an audience meant to discuss the welfare of pensioners in Ondo State. An opportunity the union itched for, for six years when the immediate past governor put in the cooler the annual Pensioners’ Day Celebration often held on the 11th of December in all states of the federation,” Adetuwo had said during the union’s recent courtesy visit to Akeredolu at the Governor’s Office, Alagbaka, Akure.

Like an old coin that had disappeared from circulation, the gloomy days of depression and uncertainty have gone for good in Ondo State. The ray of hope shone brightly to the state civil servants and pensioners 20 months ago when Akeredolu assumed power.

Since he assumed power, the governor has been up-to-date in the payment of workers’ salaries, while four of the seven months’ arrears inherited have also been paid. He promised to pay the remaining three months arrears soon.

Akeredolu, who cherished the civil servants as partners in progress, has said in many fora that his administration’s intention was to serve the people and make their entitlement his government’s priority.

“It is only a wicked leader who will deny workers their entitlement. We have not owed our able workers a dime since we assumed office and we are not ready to owe them, no matter what happens,” Akeredolu had said during a recent chat with journalists.

It has yet to be disputed that promotion and implementation of friendly initiatives motivate workers to be highly productive.

Due to his administration’s worker-friendly disposition to stimulate higher productivity, Governor Akeredolu has promoted 14,016 public servants since February 2017. The beneficiaries of the promotion exercise cut across the main civil service and self-accounting agencies, boards and parastatals of the state government.  Six thousand, nine hundred forty-one (6,941) workers were promoted in 2017, while 7,075 were promoted in 2018 promotion year.

As noted by the Chairman of Ondo State Civil Service Commission, Dr. Afolabi Adewakun, the promotions have returned smiles to the faces of the civil servants in the state.

Adewakun said: “Governor Akeredolu graciously approved the promotion of all deserving officers in the public service despite the economic challenges being experienced in the country at the moment.

“The governor gave the approval as early as June, and you will agree with me that this is unprecedented. Hitherto, such approval comes up around October/November of the promotion year, and the exercise would not be completed until December.

“Immediately the approval was received, all the ministries and extra ministerial department were directed to swing into action and work in earnest.”

Of particularly noticeable was the elevation of no fewer than 16 deserving officers to the position of permanent secretary at once.

In agreement with the popular maxim that access to affordable accommodation and ease of transportation are parts of the ingredients that  spur workers to be effective at their respective duty posts, Governor Akeredolu approved about N943 million as car and housing loans to interested workers to enhance their morale and boost their self-esteem.

The governor also disappointed critics last week when he paid the 2017 leave bonus to all the categories of the state civil servants.

Pensioners were not left out in the welfare package scheme. Since he assumed office, Akeredolu has met with the senior citizens with a promise to continue to make the issue of their welfare a priority.

To the delight of the pensioners, who were full of praises to Akeredolu during their visit to his office, the governor has been prompt in the payment of the senior citizens monthly entitlements.

Adetuwo, state chairman of NUP, said: “Let me, therefore, on behalf of pensioners in Ondo State register the union’s profound gratitude to the governor for his love and respect for the senior citizens in the state.

“The governor’s interest to provide fund for this year’s Pensioners’ Day Celebration and to put on road the union’s thirteen-year-old bus is very much appreciated.

“Besides, the prompt payment of monthly pensions since he came on board and his frantic effort to completely clear the liabilities inherited from his predecessor are commendable and praiseworthy.

“Of course, the financial contribution he made to promote the union’s new born magazine is a singular proof that the people’s governor was once an understanding and successful union leader well equipped with unionism experience.”