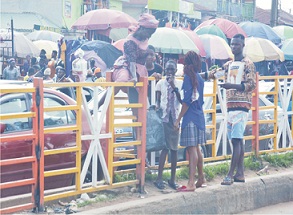 By Sunmola Olowookere
|
Traders at the Erekesan market have been warned to desist from vandalizing the median along Oba Adesida road else they will attract the full wrath of the law.

Issuing this warning was the Commissioner for Transport, Tobi Ogunleye in an interview with The Hope.

Ondo State government had recently directed  members of the public use the pedestrian bridge along Oba Adesida road while crossing to the other side of the market.

The development had attracted some reactions from the traders along the Erekesan market as they put forward myriads of reasons hindering them from  following the directive from the state government.

Ogunleye, while reacting, warned vandals to desist, saying  government will come with it full weight of the law if the vandals failed to heed to its warning.

He insisted that the traders must understand that Akure is a cosmopolitan city and hence should be treated as such.

He said that prior to the incident, he had held several meetings with the leaders of the traders and impressed it on them on the need for people to use the pedestrian bridge.

He opined that this development became imperative so that there would be reduction in accident casualties that could occur when people cross the busy exprressway.

He assured that the government will not succumb to any form of threat as some of the traders openly threatened that they would continue to vandalise the median each time it’s repaired.

He stated that the leader of the turkey sellers association had called him to protest the closure and had invited them all for a meeting where they could dialogue and seek common grounds.

He said that he had offered that in agreement with his counterpart in the Ministry of Works, they could construct a small opening for the disabled and the aged where they could cross the median while cars would be directed to allow them cross.

He stated that the pedestrian bridge had been there for a long time and there had not being any robbery report.

He cited instances of Lagos and Ogun states and said that no one dares cross the expressway because they would be arrested.

He stated that as part of its enforcement measures, a vehicle would be stationed at the Oba Adesida road and will be used to convey people arrested there to the police station and they will be charged to court.

He said that his ministry had been carrying out awareness campaign and promised that they would not relent.