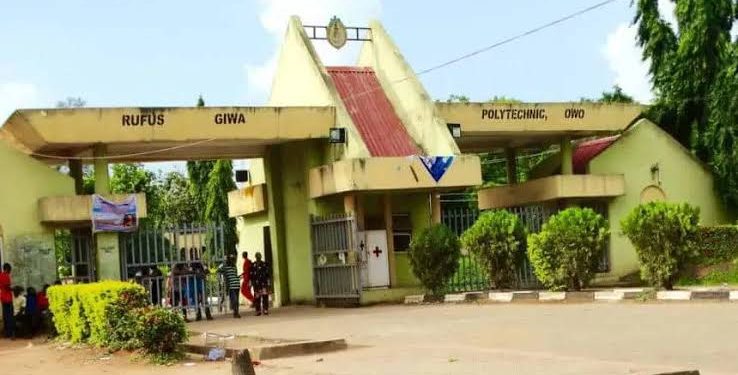 The suspension followed the report of the Visitation Panel that Alabi refused to honour its invitation on several occasions.

The Governor announced the suspension while receiving the report of the 7-member Visitation Panel to the Polytechnic.

According to the Governor, “the Chairman remains suspended until I hears from him.”

Submitting the Panel report on Thursday at the Governor’s Office, Alagbaka Akure, the Chairman of the Panel, Professor Olabode Kolade Koriko, appreciated Governor Akeredolu for finding it necessary to constitute the Panel.

The Chairman, who applauded Governor Akeredolu for releasing about N1.6bn bailout to the Polytechnic, hailed the Governor for his commitment to reposition the Polytechnic and restoring its lost glory.

Prof. Koriko revealed that the Panel in the course of its assignment, held meetings and had interactions with relevant stakeholders from the Polytechnic and the host community at different locations in Owo before arriving at the recommendations.

“Rufus Giwa Polytechnic until recently remains a model of institution in the South-West over the year, however, poor management of human and material resources appears to have eroded the gains of the past and turned the once famous citadel of learning that has produced very successful men and women in the society to a shadow of its self.

“Your decision to set up the Visitation Panel at this auspicious moment could therefore not have come at a better time and is no doubt altruistic. It is expected that at the end, your desire to emplace probity and accountability in the management of this great citadel of learning would be realized.

“The assignment which spanned a period of 3 months, commenced with the inauguration of the Visitation Panel by your good self on 21st September, 2022.

“The Panel in the course of the exercise met at different locations in Owo and Akure during the three months duration of its assignment, critically perused all the items listed in the 7-point Terms of Reference , met with the relevant stakeholders, collected Memoranda from Staff, students and the Community, executed an extensive verification of staff and accounts of the Polytechnic, reviewed the laws of the Polytechnic, critically analyzed the content of the submitted Memoranda, other materials and oral evidence available to it to arrive at its recommendations.

“The Panel also had extensive interaction and meetings with Principal Officers of the Polytechnic, union bodies, Chiefs of the host community, and of course the petitioners who were often invited to the Panel sitting for interrogation while a comprehensive inspection of facilities of the Polytechnic (including buildings, vehicles, ventures etc) diligently executed”, the chairman stressed.

Receiving the report, Governor Akeredolu appreciated all members of the Panel for their labour, with a promise to look into the report.

Akeredolu who expressed worry over what he called downward slide being observed in the Polytechnic, expressed belief that the report would guide government on what to do.

“Coincidentally, I am from Owo, I was inundated with several complaints here and there. A number of them I am not able to solve. I asked questions and got answers that probably are not correct, I can’t understand.

“I got information that several people have been recruited and when I asked they will say no. Then why is your wages going up? Why can’t you pay?

“We have intervened on one or two occasions and we gave money with specific instruction to pay salaries. At the end of the day you cannot still complete salary payment. I’m sure your report will contain this.

“Management, yes, there might be some problems with human and material resources but as I always say when they come and meet me, I know from verifiable facts that the Rector has attracted enormous funding to that place either through TETFUND or others, because of his connection. You can’t take that away from him”, Akeredolu explained.

The Governor also declared that it has become more desirable now to turn the Polytechnic to university, noting that there is no going back.

He stressed that the Polytechnic has all it takes in terms of facilities to become a university.

Present at the event are the deputy governor, Lucky Aiyedatiwa; the Secretary to the State Government, Princess Oladunni; the Chief of Staff to the Governor, Chief Olugbenga Ale; the Head of Service, Pastor Kayode Ogundele; Commissioner for Finance, Wale Akinterinwa; the Commissioner for Information and Orientation, Bamidele Ademola-Olateju; Commissioner for Education, Science and Technology, Pastor Femi Agagu among other State Executive Council members.