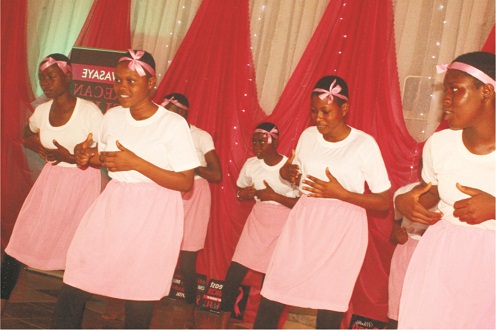 She gave the commendation yesterday while inaugurating the BRECAN Club, Fiwasaye Girls Grammar School’s chapter at the college premises.

While urging teachers and students of the school to spread the awareness about breast cancer, Mrs Akeredolu, who was represented by the BRECAN National President, Mrs Juliet Ogbogu, explained that having BRECAN in secondary schools across the state will help to create more awareness.

Her words: “The idea of having BRECAN club in schools is to catch them young and have more people who will help in spreading the good news of BRECAN. Children will  not be shy like adults to educate people on breast cancer because at home, they will discuss it with their parents, siblings friends and others they come across. That is why I am happy with their involvement at creating awareness about breast cancer.”

On how BRECAN is impacting the citizens of the State, Mrs Akeredolu said that the awareness is a continuous one with many people including those in the rural areas getting better educated about the disease and those who are victims already receiving treatment through the financial support of her association.

She appealed to people to join her association by participating in the crowd funding, initiative so that more cancer patients can access treatment, adding that she alone cannot foot the bills of all the victims, which she said is very expensive.

The guest speaker, an Oncology Consultant at the Federal Medical Centre (FMC) Owo, Dr Aba Katung described the event as timely, which according to him will help the students to get early information and education about the disease and also educate others. He challenged other schools to do same for the  awareness campaign against the disease to go round fast.

“This programme is a commendable step towards fighting breast cancer because prevention is better than cure. When people get information about the disease early enough, it will help to pass it round to others including people at the grassroots. I wish this idea is replicated in other schools across the state and even in the country so that the fight against breast cancer scourge  can be easily won. “

The Oncologist further explained that the reason for poor cancer treatment in the country is due to late presentation to the hospital by the victims which makes saving their lives difficult.

“Early detection and presentation saves lives. Cancer has five stages and the right stage to present it is stage one or two but what we discovered is that 96 per cent of cancer victims present themselves at stage four and five when most of the cells had been affected. Breast cancer is curable if only patients report at the hospital early. That is why breast self examination is very important. Check your breast once in a month for any unusual change and report such immediately to the hospital.”

One of the beneficiaries of the First Lady’s cancer treatment, 53-year-old Mrs Elizabeth Akande, who described Mrs Akeredolu as God-sent, explained that after her family had spent all they have to treat her and could no longer foot her bill, she was introduced to Mrs Akeredolu who promised to shoulder the financial responsibility.

“The First Lady directed me to FMC Owo for the continuation of my treatment since last year and today, I am getting better. There are others who are equally undergoing the same treatment like me courtesy of Mrs Akeredolu. I want to thank her and pray for God’s protection for her and her family. If not for her, I don’t know how most of us who are victims of cancer will be able to pay the high treatment bill .”

In her opening address, the Chairman of BRECAN, Ondo State Chapter, Dr Toyin Ayimoro while welcoming everyone to the event, said that the purpose of BRECAN is to rid the state and the nation in general of cancer.