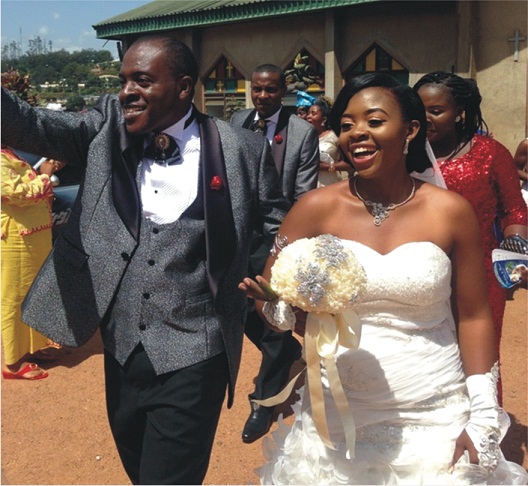 These days, in most occasions, what we see is  nudity, especially at wedding ceremonies, and this is quite disturbing including  those who profess sanctity.

Those who have been to a wedding recently will agree that from the bride  to the bridal train, it is often a garish display of  flesh and sensitive  parts which we would rather not see, to be honest.

Guests on the other hand will rather put on outfit that will compete with that of the bride,  causing confusion among other guests as to who the bride is, forgetting the fact that one can be gorgeously dressed without exposing  the body.

A gospel minister, Mercy Chinwo trended on social media for the modesty in her bridal outfits with many advising brides to emulate Chinwo’s modesty and cover up on their wedding day,  instead of the barely clad brides with boobs all out on display and long thigh slits which have become the current trend for brides.

While some were of the opinion that brides should be allowed to wear whatever they are comfortable with on their wedding day, many advocated for modesty with reference to Mercy Chinwo as a role model. As Mercy Chinwo has proven with her choice of bridal attires, both for her traditional, civil and church wedding, we now know it is possible to dress modestly and look amazing while having fun on your wedding day.

It will not be out of place if brides to be can borrow a leaf from Mercy in this regard, in order to save this generation from the craze of nudity in the name of fashion.

Recently, I stumbled on a post on social media which reads: “Some months ago, I received an invitation to a wedding in my village. It was actually a friend’s wedding and I bought the aso ebi as expected.

“When I took it to the tailor, I just told her to make something simple for me, as the wedding was to take place in the village. On the said day, I got to the venue to be welcomed by different indecent styles by the ladies and I said within me that the world is finished.

“I used to think before then that those in the villages would  still have a sense of decency, but I was wrong as the styles were nothing to write home about. In fact, I can say that it is worse than what obtains in cities”.

Tee Adekunle put up a post on one of the social media platforms and it states that “bridesmaids now dress like street girls; everything looks like it is under pressure.

“ The bosoms look like apples about to fall off trees, bleached thighs on display like freshly baked doughnuts. More fabric is used on the floor than it is on the body. 12 yards of 300k fabric purchased and only 1/2 yard is around your body.”Even as a lady, I cringe at some wedding gowns. I cannot imagine how men cope. I wonder at the consent of the ‘husbands to be’. How can you be comfortable with your bride dressed like a half peeled banana? I also wonder at the parents… Is there nothing sacred anymore? Nothing hallowed?

“Please, unmarried ladies, bridesmaids, don’t let the devil use you. That it is in vogue doesn’t mean it’s not rogue. No man of value will pursue you on account of your bare behind or frontals.  “If you are a true royalty, you will dress like one. Let me put it as it is: COVER YOUR BREAST, COVER YOUR THIGHS, COVER YOUR BOTTOM. Your pants and bras are UNDERGARMENTS. Put on some real clothes”.

Another person, while passionately appealing to wives to be, wrote thus too;  “Dear Brides, cover your breasts, that reception dress you want to change to, I don’t want to see your upper thighs in the name of front slit. Children can no longer be taken to weddings, even babies too,  as they may mistakenly think the bride wants to breast feed them.

“Weddings used to be solemn and revered. It used to be a sacred event.  “As a young Methodist lad,  I usually looked forward to the angelic bridal entrance but the reverse is the case now.

“Dear wedding guests, you too, cover your breasts and other areas. If the asoebi material is not enough, buy crepe or satin and add to it. It will not kill you and I want you to know that weddings are not night clubs.

“We don’t want to see breasts  and thighs in church. Church is not night club. It’s the holy sanctuary of God. Be covered  girls!”

Speaking with The Hope, a farmer and Evangelist, Mrs Adeola David, said that the body is God’s temple according to the Bible, which must be kept holy all the time. Lamenting over the nudity which has taken over wedding ceremonies these days, she attributed it to the rot in the society, noting that almost everybody is guilty of it.

According to her, both the young and old have embraced the trend,  which  if not checked, decency will no longer be applicable in the society. “I must say that I weep for this generation and even wail  for those coming behind it. What we see at weddings  these days is nothing to write home about. Some brides still honour God to an extent with their outfits during matrimony in churches, while others  care less. What happens in most receptions is alarming, as it can best be described as nudity of the highest order.

“As the brides and their trains are half naked, the female guests on their parts add to it with their indecent dressing, as if it is a sort of night club. Their parents too are happy about it because they feel their children are civilised. It will shock you to even know that some parents now follow the trend as they not only wear revealing clothes but also accompany it with heavy makeup. What a world.

“I think the way out is for God to minister to the souls of these ones Himself. This is indeed devil in operation.”

A mother of a bride to be, Mrs Bisi Abidakun said that she would  never be a party to indecent dressing in all aspects, noting that it has become rampart due to negligence especially on parents’ part,

According to her; “God blessed me with four girls and with the help of God, they have been properly raised. Although, I am not always with them, I do receive good reports about them. Two of them are married, while we are trusting God for the remaining ones. They attend occasions but I have never seen them dress indecently. They ensure that their bodies are covered, at least to the knee and this doesn’t mean that they won’t be elegantly dressed.

“Our culture embraces decency and that is what everyone should have in mind when attending any function.”

Mr Supo Adeyemo, a 43 -year- old lecturer noted that an occasion outfit is determined by so many factors, stating that the society plays a major role in it. He said that even though he likes sighting classy guests at events, it is morally wrong for wives and mothers generally to dress indecently.

His words; “I like it when my wife looks presentable when we go out for occasions together, but that doesn’t mean she should reveal her hidden treasures. A woman can cover up and still look take away. Those ladies who dress to kill are most times perceived as prostitutes by men.

“For the brides, I feel their husbands like it that way and besides their dressing says a lot about their background, because I cannot imagine my daughter giving me public disgrace with her outfit on her wedding day, I’m sure she will not.”

An undergraduate and makeup artist who simply gave her name as Victoria said that there is nothing wrong in dressing to suit one self on a special event. “I won’t mind what anyone will say on my wedding day because it is once in a lifetime. I will dress  to bring out the babe in me.

If my church says it will not join my fiance’ and I in holy matrimony due to my wedding dress, I will go straight to the registry. It is our time and ladies have to move with the trend.