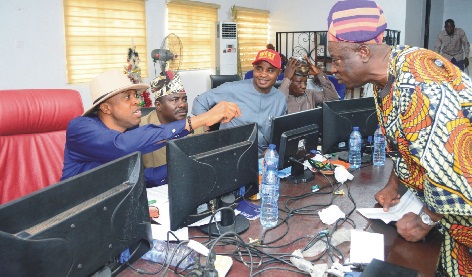 As the Ondo State House of Assembly commenced the 2023 budget defense yesterday MDAs have been charged to propose in line with the economic realities towards producing workable document for the next fiscal year.

The Speaker of the House, Bamidele Oleyelogun who was represented by the Deputy Speaker, Samuel Aderoboye gave the charge while declaring open the programme.

Among MDAs who have defended their budget include, Owena Press Limited ,Publisher of The Hope titles, Ministry of Information, Office of the Deputy Governor, Office of the Head of Service, Local Government Service Commission, OSRC media group among others.

Oleyelogun said it is a significant event in any fiscal year, bearing in mind that the performance of any government is highly dependent on the subject matter.

According to him,the budget estimate is to further consolidate on numerous on-going programmes/projects of the present administration and accelerate the pace of socio-economic transformation, improve security network and development of the State.

He stressed that the budget is geared towards collaborating with local and foreign donor Agencies, development partners and to continually identify with the Federal Government, saying that the expectation at this end is  that all stakeholders will co-operate maximally with the State Government towards achieving the set goal.

Earlier in his opening remarks, the Chairman House Committee on finance and appropriation, Akintomide Akinrogunde noted that the defence will ensure accurate and proper budgetary provisions to all MDAs.

He informed that the proposal was thoroughly debated on the floor of the House after which it was committed to the Committee to scrutinize the provisions contained therein for the betterment of the citizen of the State.

Akinrogunde noted that it is another opportunity to painstakingly review the proposal, putting into cognizance the limited available resources and economic realities rather than mere increase or reduction in the revenue and expenditure components.

He said the budget proposal revealed the prioritisation of the economic sector, with the highest allocation would no doubt address a lot of economic matters assuring that the Committee will do justice to the budget within the stipulated period.

Speaking, the State Commissioner for Economic Planning and Budget, Mr Emmanuel Igbasan informed that the Ministry prepared the draft after harvesting the inputs of various stakeholders, including people at the grassroots in the State.

Various MDAs who spoke in separate interview with The Hope promised to deliver on their mandate to achieve the set objective.