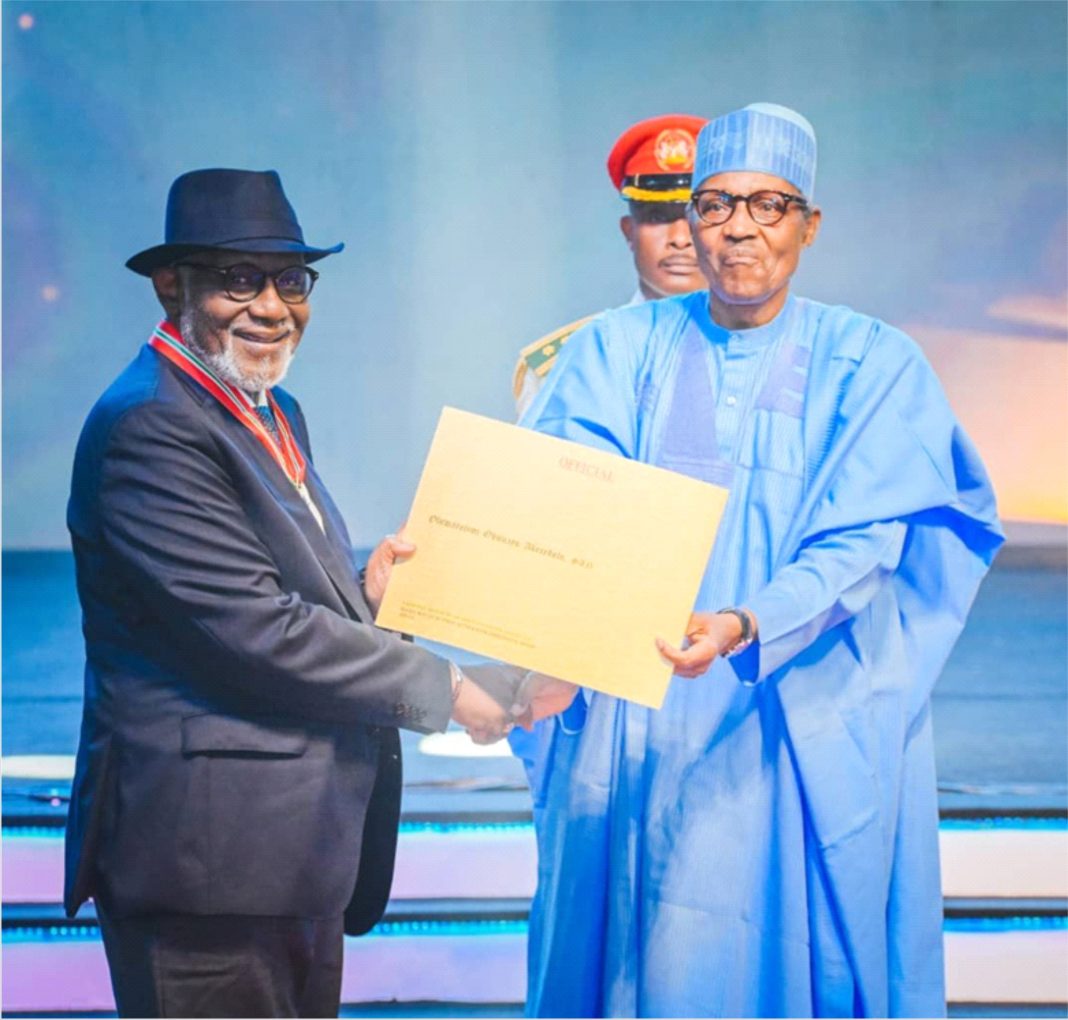 Ondo State Governor, Oluwarotimi Akeredolu, yesterday received the National Honour Award of the Commander of the Order of the Niger, CON.

The National Honour was conferred on Governor Akeredolu by President Muhammadu Buhari at the International Conference Centre, ICC, Abuja yesterday.

In an interview shortly after the ceremony, the Governor said his belief in Nigeria is reinforced and strengthened by the Honour.

He dedicated the Award to the people of the state, just as he said his commitment to security of lives and property of the state, the South West and Nigeria is total.

The Governor who described the national honour as a morale booster for him to do more for his people and the country, also said the Award has further shown that Buhari is somebody that can be trusted.

“This award means a lot to me because I never expected it. So, for the Federal Government to think about giving me this Honour, I want to thank the President of the Federal Republic of Nigeria.

“Whether we like it or not, the struggle for a better Nigeria is what I stand for, and I believe that is being recognized. I thank Mr President and the Committee.

“So, I strongly believe in Nigeria and that stands forever”, the Governor stressed.

Also, at a reception organised by Dr.Jimoh Ibrahim, CFR, for the state awardees, the Governor equally reaffirmed his strong belief in state police, restructuring and the Southern presidency for equity, justice and fairness.

Akeredolu thanked all the members of the State Executive Council for their belief in ‘One Administration mantra’ for overall development of the Sunshine State, even as he congratulated all other Awardees from the state.

Speaking at the reception, the host, Dr Jimoh Ibrahim who congratulated Governor Akeredolu, described the Honour as significant, historic and good for the people of Ondo.

“Mr Governor, this is a  very important milestone as far as we are concerned, and the people of Ondo State really appreciate it. Your conferment is based on merit”, he said.

According to the business mogul, the Honour is as a result of the Governor’s sterling achievements in the state including his doggedness, courage and boldness in the fight against insecurity to protect the lives and property of the people, not only in the state, the South West but the country at large.

Ibrahim also lauded Governor for bringing integrity, probity to governance and ensures prudent management of scare resources for the benefit of the people of the state.

Also, at hand to witness the event were the Wife of the Governor, Mrs Betty Anyanwu-Akeredolu; the deputy governor, Lucky Aiyedatiwa and the Speaker of the Ondo State House of Assembly, Bamidele Oleyelogun among others.