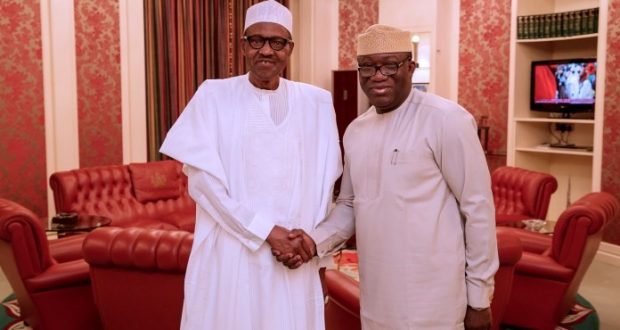 From Victor Akinkuolie, Ado Ekiti
|
President, Mohammadu Buhari, his Vice, Professor Yemi Osinbajo as well as 20 Governors from the All Progressives Congress ( APC) extraction are expected to grace the inauguration of Dr Kayode Fayemi as the new Governor of Ekiti State slated to hold on Tuesday, October 16, 2018.

The Chairman, Media and Publicity Sub-Committee of the inauguration, Mr. Yinka Oyebode, who spoke on behalf of the Ekiti State Governor-elect, Dr Kayode Fayemi, made the disclosure during a press conference, organised by the committee in charge of the inauguration on Wednesday in Ado Ekiti, the capital of Ekiti State.

Dr Fayemi also used the occasion to extend invitation to the outgoing Governor, Ayodele Fayose, saying that he is free to grace the epoch-making occasion as a leader of the state.

The Governor-elect also explained that parts zof the Programmes lined up for the ceremony include a Lecture and Essay competition entitled: “Reclaiming Our Land, Restoring Our Values, Ekiti of my Dream”. The lecture, according to the sub-committee chairman will be delivered by the world renowned Poet, Prof. Niyi Osundare.

“The committee for Dr Fayemi’s inauguration has been communicating with those working on the side of the government. The government also graciously gave us the use of some of its facilities, so we have been working together.

“President Buhari attaches much interest to the ceremony, because of the love he has for Ekiti people and he will also be attending as the father of the nation.

“All the state governors have been invited and Governor Fayose, being an outgoing Ekiti governor is free to attend,” he said.

“I know that we have challenges, but those problems are not insurmountable. Fayemi’s inauguration on October 16 will be a new dawn in Ekiti land. We shall begin work on how best we can give our people values for their lives and how to ensure they take ownership of their own government.

“President Buhari attending this programme is novel. It shows the significance of this ceremony . it shows how important and strategic our state is in the federation”, he added.

Fayemi also added that the suit filed by former Governor Segun Oni and the one instituted by the candidate of the Peoples Democratic party in the July 14 poll , Prof Kolapo Olusola can’t stop the inauguration ceremony.