Home General Viewpoint Buhari towers above them all 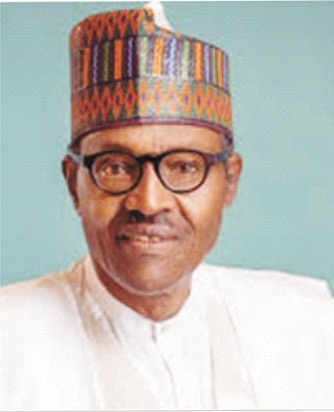 By Ayodele Fagbohun
|
As the electorate file into various polling booths to  elect new president on Saturday to steer the affairs of the country for another four years, we must pause, take a sober reflection and elect President Muhammadu Buhari for his solo and spirited anti-corruption  crusade to rid the country of corruption and graft which is the bane of the economy.

President Buhari towers over and above other presidential contenders gallivanting all over the places;  jockey for power, in terms of wealth of experience garnered over the years as  former Head of State, State Governor and at various times at the commanding height of the nation’s economy.

Muhammadu Buhari,  as a genial person with smile; taciturn  remains serene  and unperturbed  in the face of harsh provocations, blatant falsehood and vile propaganda to tarnish his reputation  built over the years as a high ranking military officer and tactician to serve his nation and  leave the society better than he met it.

Buhari means well to drive the economy of the state. Towards this end, he is focused,  resolute and determined in his self imposed mission to wipe out corrupt practices and wrong doings in both public and private sectors of the economy.

Corruption is a hydra-headed monster and scourge which must be confronted headlong and must be exercised as a necessity if the country must survive, know peace and prosperity. All hands must be on deck to rally round and in full swing support Muhammadu Buhari,  a man of sterner stuff; heart of steel, a man of the moment imbued with magic wand and where withal to accomplish the onerous and arduous task of good governance.

The fragile outlook of the president  might be specious,  President Buhari’s consistency in tackling the knotty issue of corruption is so electric to galvanize groundswell of acceptance across the country.

This is why  Buhari deserves a second term in office not on account  of continuity per se. To clear the mess, rot and the Augean stables of sixteen years of financial pillage, plunder, profligacy and licentiousness  of the People’s Democratic Party  led administration. This demands supermen/women of ascetic discipline and titanic disposition should be  at the helm to provide the requisite able leadership.

So it comes  into handy the  principle and dictum of President Buhari that “slow and steady wins the race.” Doubtless,  if Muhammadu Buhari wins on Saturday by the grace of God and the verdict of  the electorates,  the All Progressives Congress (APC) led administration will endeavour to consolidate the  cause of good governance and  democracy.

It is very silly and thoughtless in the extreme to equate and compare, by stretch of sane imagination, General Olusegun Obasanjo’s military junta (1975-1979) and his presidency (1999-2007)  Major General Muhammadu Buhari (1983-1984) and the present Buhari led APC administration.

Both are retired military generals and very advanced in age. General Obasanjo was very vindictive. He was and still rash and brash as ever having an axe to grind with perceived adversaries. Obasanjo did  not care a hoot to preside over liquidate economy; caused untold mis-deeds in government, mayhem and violence across the country.

As  President,  Obasanjo was reported to have  ordered genocide to be unleashed on certain village  of  Odi, tucked away in Bayelsa  State. All this naked display of brutish and arrogant power stemmed from moral  turpitude  and psychoanalytical trauma suffered by General Olusegun Obasanjo. This  unfortunately reflected on the way  he governed and ruled the nation with iron  hand as if Nigeria is his personal estate.

It must be admitted that General Muhammadu Buhari as military Head of State committed some flaws and injustice among  certain governors who were not found to be corrupt afterall.

Muhammadu  Buhari was  known to have shown remorse and made amends. Beatifically, the defunct ANPP/AD almost struck an alliance to field Muhammadu  Buhari of ANPS as a joint  presidential candidate alongside  the Alliance for Democracy (AD), in 2003 general elections. The arrangement or deal took place right inside the Government House, Alagbaka, Akure under the guidance of some chieftains in AD led by Ondo State Governor, Baba Peace, Chief Adebayo Adefarati of the blessed   memory.

Muhammadu Buhari, a thoughtful, considerate personality is ever ready to learn since he is conscious of the fact that partisan politics and service in the army and in the military alike is a different kettle of fish.

To further illustrate the point that the  country stands to achieve on ethical revolution if  Muhammadu Buhari is given the mandate on Saturday, compared to Obasanjo who is canvassing for PDP flag bearer, Atiku Abubakar General Obasanjo was conspicuously absent from the burial ceremonies that translated the remains  of the  late Chief Obafemi  Awolowo to the great beyond. Though  the seat allotted to Obasanjo   was occasionally shown on in the television sets vacant during the memorable occasion.

Whilst Muhammadu Buhari, as a chieftain of All Progressives Congress (APC) and presidential candidate  visited  Ikenne country home of Awolowo and paid glowing tribute to the great matriarch,  Mama HID Awolowo during her passage of rites.

At 76, Buhari could not have condescended  to “Fulani herdsmen rampage all over the places  especially in the  North Central states of  Taraba, Benue, Plateau. This barbarous show of shame  total insecurity, mayhem and violence  pervading the North Central particularly in the Jukun dominated area of  Taraba State is blemish  on Lt. General Theophilus  Danjuma who hails from the area. Inspite of his prodigious wealth, Danjuma lacks resources to steam the ill tide let alone nipping the menace in the bud, his high  and prestige status in the society notwithstanding. He who  sows wind shall definitely reaps whirlwind goes the maxim.

The problem of ethnic cleansing confronting the people was a hangover of long military dictatorship, poor management of  the nation’s economy that enrich a few like Lt. General Theophilus  Danjuma,  General Olusegun  Obasanjo,  Brigadier General David Mark and co. The  lopsided economy invariably tilted against the fortunes of the poor, vulnerable and less privileged to serve as hewers of wood and drawers of water.

Indeed, there is growing discontent and resentment amongst the populace and the result is armed struggle, banditry, kidnapping, lawlessness being remorselessly fuelled by terror around the world.

In their unwisdom and grand folly the top rich military brass living life of spendour and untouchable, now gather in glee to stop President Muhammadu Buhari led APC administration from liberating the poor and half their excesses in and outside the government. They  are already multi billionaires living in hideous and extreme comfort and in safe enclosure living the rest of the populace to wallow in penury want and superstition.

This ugly  trend of inequality of  the nation’s resources must be reversed and addressed to foster the cause of egalitarianism which is the hallmark of President Buhari led APC administration.

The electorate is therefore enjoined to troop out on Saturday and elect President Buhari/Osinbajo led APC administration once again to  guarantee good governance anchored on  self  discipline and probity.