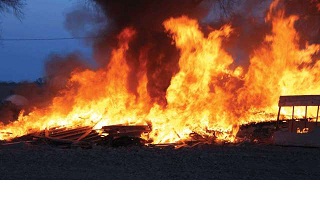 Alternative medicine practitioners have condemned the indiscriminate bush burning, felling of trees and the use of herbicide to clear weeds, describing them as  threats to their healing efforts.

The stakeholders spoke with The Hope on Tuesday.

A herbal medicine practitioner,  Tolorunju Adewumi, called on the people to desist from these practices in order to allow them have access to raw materials.

Adewumi cited the use of chemical on weeds, saying it  can be very dangerous when used without proper cleansing.

He appealed to the government to be proactive in efforts to prohibit annual bush burning and illegal felling of trees in the country.

Another traditional healer from Afin Akoko, in Akoko Northwest Local Government, Chief Kazeem Balogun,  described the efforts of the traditional healers as very germane in the health sector,  hence government must give them recognition and provision of conducive environment for them to operate side by side with their orthodox health practitioners in the country.

An environmentalist, Chief Sule Arekemase,  corroborated their views, particularly, the call to end incessant and indiscriminate bush burning and felling of trees which often leads to  desertification and giving room for devastating rainstorms.

Arekemse appealed to people to desist from the practices which he said also affect wildlife animals in our forests.