Can a breadwinner wife be submissive? 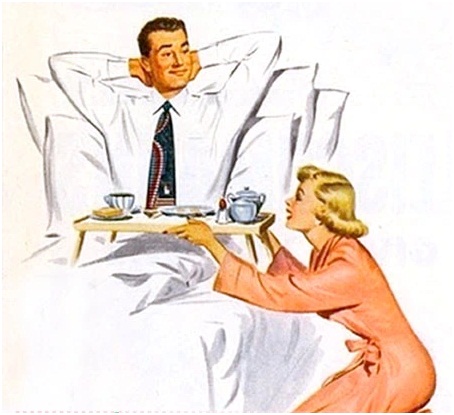 Olakunle is at the end of his tether. He regrets marrying Olawumi all the more each time she pushed it down his throat that she is the breadwinner of the family.

Even residents in our neighbourhood are aware of the fact that Olawumi has assumed the position of the husband in their household while forcing her husband into the constricted and relegated position of a wife. They wondered if a wife who is the breadwinner of the family can ever be submissive to her husband.

Olakunle was a young man struggling to make ends meet when he met his wife. Although he admired her but he dare not make his amorous intention known to her because she was well off with a good job while he had no stable job despite being a university graduate.

They both attended the same church as youths and Olakunle was very friendly with her and solicitous about her well being.

Everyone around them could see that he was smitten with her. But he was afraid of proposing to her. They were both getting on in years and suitors were not really queuing to seek Olawumi’s hand in marriage.

She waited and waited for him to pop the question but he kept hovering around her without revealing his feelings. Olawumi’s friends too wondered what the deal was with the hovering brother. It got to a point that Olawumi had to take the bull by the horns and asked him what he really wanted from her.

They were in her house. Olakunle came to help change some bulbs at her request and she had popped the question saying they were not getting younger and that they needed to define their relationship.

He looked at her with love and regret swimming in his eyes. Manning up, he blurted, “I want you for my wife. Right now, I am trying to get a job so that I can take care of you and not depend on your income too much because the one I am doing now cannot take care of a family. That is why I have been hesitant to propose to you.”

Olawumi was pleasantly surprised at his words. She began to encourage him that they could build a family on her salary while he tries to get a job. She was eager to settle down in matrimony.

By then, both of them were in their early thirties. Olawumi loved everything about Olakunle and was ready to make the sacrifice of marrying a man without any steady income. She mounted pressure on him that if he truly loves her, he would accede to her request to get married first and continue to wait on God for a good job.

Despite his reservations and misgivings about getting married without a stable income, he allowed himself to be carried away by the feelings of the moment and they began to plan their wedding in earnest.

Olawumi was so happy that her dreams were finally coming through. She was leaving spinsterhood and getting married. Their pastor tried to caution them but they were not ready to hold back and wait till when the husband would get a job.

They settled down to marital life and the first year was so blissful. Then as the children began to come, responsibility came along with it. Within five years, they had three kids. Within the five years, their bliss and tranquility had flown out the window.

With several complaints and insinuations, the wife impressed it upon her husband that he had to see to the running of the home and care for the children since she was gainfully employed and he was not.

At first, he did not mind. But as time went on, the entire chores fell on him too; cooking, washing, housecleaning, school runs. She rarely helped out. To worsen matters, she began to deny her husband his conjugal rights.

It was either it was not a safe period today or she was tired the next. She no longer had time for her husband. Gone was the sweet Olawumi of the onset of their marriage. In her place was a cold-hearted and calculating woman.

Her arrogance in the neighbourhood hits the rooftops simply because she is a breadwinner wife.

Olakunle had simply moved into her house when they got married. He brought his meagre furniture and clothes when he moved in with her. Now his wife was making the house stifling for him.

Being a man, he was now feeling uneasy with the marriage. He regretted his hurry to get married and their pastor’s caution to put some things in place first.

He wished he could walk out of the relationship but he found it hard to leave his children and he could not go with them because they were still very young.

All love seemed to be lost between them and he was only bidding his time till when he will walk out of the relationship.