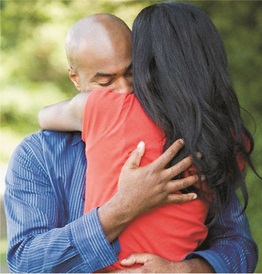 Can forgiveness transform your relationship?

By Itunu Oloyede
|
Love does not mean never have to say sorry. Apology and forgiveness are not static concepts, they involve mutuality and a way of staying connected.

To forgive means we have room in our hearts to embrace and ensure that peace reigns in our homes .

Being able to forgive one another teaches us to love each others around us in a godly way, and it helps us to become more sensitive to the effects of our actions on others.

There is no doubting the fact that forgiveness makes us better husbands, wives, parents, friends, co-workers and people.

It is important to note that forgiveness is a process. You can intend to forgive, but you cannot control the steps to forgiveness or how long it takes to get there. Whatever it takes, set yourself on the path of forgiveness and give yourself grace and time as you get along.

Furthermore, when we forgive one another, we are extending sacrificial love and our bond grows deeper. There are going to be times when we need to offer forgiveness to our spouse, whether they have asked for it or not. Remember, when you do this, you are freeing yourself from a prison of resentment. Forgiving each other as couples also helps you to teach your children and people around you that forgiveness is key to a successful relationship.

In marriage, when we offend each other or there is conflict, we see our spouses as the cause of the problem without looking at what led to it. No one should hold criteria for forgiveness, but must forgive unconditionally.

Note that successful marriages are based on humility and forgiveness though it takes time to let go of those things you have no control over. Do not be shy or arrogant to say sorry, it makes the other person knows that you care and understand him or her better .

Even though you may find it difficult to forgive, being able to do so is crucial in a marriage. Always have it in mind that “To err is human but to forgive is divine”.

Apology and forgiveness are not static concepts, they involve mutuality and a way of staying connected and moving on. To forgive is simply exhibiting maturity.

Even though, forgiving your partner when they have done something to upset you can be one of the hardest things to do in a relationship, you must remember that Forgiveness is not  just about retaining harmony in your relationship; it is also about being kind to yourselves.

Forgiveness can never affect, but transform your relationship.

Forgiveness empowers you and makes you stronger. Experts believe that forgiveness can allow you to break the cycle of pain and move on to a healthier life.

Feminine Line equally went round the town to interview people on the topic, and they have these to say. According to a civil servant, Mrs. Mariam Quadri, “Forgiveness has helped me and my husband to move on  than we thought we would ever be. After 10 years of separation ,we reconciled about a year ago, we are growing stronger together and have forgiven each other for the past hurt and will continue to forgive each other for things that are still taking place because nobody is perfect”.

A trader, Mrs. Bola Ogungbe said “I noticed that I have been able to forgive faster than my husband. He is a little bit tougher. The most recent issues was when  I lied about going to my mother’s house, he found out and was really hurt. Though I later realised that I should not have lied. I actually told him why I lied which was due to his past reactions, this was about six months ago and he is still  holding grudge against me, I have repented and asked for forgiveness, but nothing has changed. This is affecting the home somehow, however I will continue to pray and persuade him. Based on my experience, women easily forgive than men”.

Also speaking is a corp member, Mrs Simi Ajetomobi who noted that “I wish I was more purposeful about forgiveness when I first started dating my husband. I really struggled with anxiety then. Whenever he did something that hurts me, I would become anxious, which was very difficult to deal with. My husband is a wonderful and caring man, but then, I believed he did not love me the way I wanted to be loved.

“After a few months, I began to adopt defensive methods instead of being sad and anxious. Whenever he did something wrong, I would become so angry, to me, it was far easier than dealing with anxiety. Eventually, when he did not change in the way I expected him to, I held on to anger, which I later realised is the root of resentment and bitterness towards him. After we got married, I realised the depth of my resentment, I struggled to mend my mistakes It was actually a sad experience because I believe not being able to forgive really affected my relationship and I am advising other women who are still dating to learn from this.

On her own, a fashion designer, Adesola Adeola averred that forgiveness is a difficult process, but a necessity.”Some years ago, I discovered that my husband had been communicating with his ex whenever I was not around and lied to me that they are just friends. This really triggered my anger because I felt betrayed and disappointed. I actually held on to resentment and bitterness for long because of this ugly incidence, but I thank God for my church counsellor and other relationship sermons that changed my mind. I let go of my resentment in order to rebuild my trust in my husband, and ever since, we have been living in peace”.

Oloyede, an intern with The Hope is a student of National Open University Of Nigeria(NOUN)