Home In Our Neigbourhood Can prayers work in place of medicine? 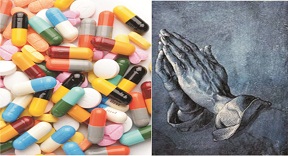 Can prayers work in place of medicine?

With Sunmola Olowookere
|
The faith of a believer wrought wonders, so they say. Many Christians, especially in our part of the world and over the past century have practised faith without taking medicine or going to hospitals to see doctors.

Many of them lay claim to recovering from their sickness or diseases without any recourse to western medicine or after taking simple drugs without going to the Hospital.

Many mothers are guilty of this as they take care of their household as they know best without seeking professional advice. These crop of mothers are believed to be bad mothers if the opinion of medical practitioners are to be followed.

However, Is there any such thing as a bad mother? Mothers are important fixtures in children’s lives. Afterall, they carried the fetus in their womb for nine months or more before going through grueling labour in order to bring them to this world.

However, there are bad mothers as it is evident in the case of a woman in our neighbourhood.

This mother neglected the health of her son and when the boy became ravaged by illness and his life slowly ebbed from him, she had begun to pray and petition God to return life back inside her son.

They were blessed with six children. However, the sad part of it is that the children lacked good parental care. They roam the streets like stray cats whenever their mother goes hawking. Their father was rarely at home as he was often busy with the work of the Ministry as he was invited to several outreach programmes.

When one of their children became sick, the mother took him to the neighbourhood drug store and the owner prescribed series of antibiotics for him as she believed that he was down with malaria.

The mother took him home and began to administer those drugs to him. After one week, there was still no improvement and she took him back to the drug store. The owner rather than tell them to go to the hospital, chose to administer stronger antibiotics and malaria drugs on the child.

The mother bought those drugs again. By then, the poor boy was looking emaciated but the chemist, in her wisdom, advised against giving him any blood tonic so that the antibiotics could work better.

Rather than get better, the boy wasted away and any strong wind could easily blow him away.

Discerning mothers in the neighbourhood called her aside and told her he was suffering from jaundice and not malaria fever.

Some even advised her to collect dry pawpaw leaves to cook for the boy with the claim that it would flush out the jaundice from his body.

She was disbelieving as she wondered out aloud “jaundice? How can it be jaundice?”

One of them insisted “its jaundice and its better you take care of him on time. Can’t you see that he is pale? Can’t you see his yellow eyes?”

The sick boy cried piteously as he bled from his bruised lips. Even as he whimpered, he still bit his lips with his teeth. He was wavering as he stood holding on to his mother’s wrapper.

She tapped his lips while rebuking him sharply. “Stop biting your lips”. The women looked at her sharply as she smacked the already sick child.

Another one attacked her ” why are you beating him? You are going about your business as you please, while you leave him by himself. Why will he not wound himself?” They looked angrily at her.

She had to tactically excuse herself if only to get them to get off her case.

However, whether she did as she was told, no one could say as the boy gave up the ghost four days later.

It was a terrible day as the boy’s situation worsened overnight and he died. The family cried and  bemoaned their poor faith. They began to pray and speak in tongues for hours, there was no change.

After almost five hours of religious exercise, where they prayed violently in their language, elderly residents came in to console them and advised them to accept their fate and let the poor boy rest.

The time for prayers had passed. God cannot be mocked, the other women in the neighbourhood reasoned. Most of them had no sympathy for her. “She killed her son with her hands”, they accused.