Can teenager’s evidence be admitted by the court? 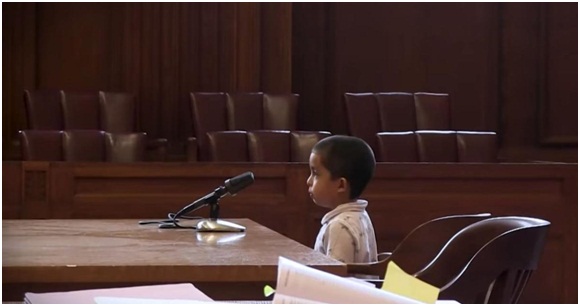 In any proceeding in which a child/teenager who has not attained the age of 14 years is tendered as a witness, such child shall not be sworn and shall give evidence otherwise than on oath or affirmation, if in the opinion of the court, he is possessed of sufficient intelligence to justify the reception of his evidence and understands the duty of speaking the truth?

Everybody must be permitted to express his/her mind in court, this is part of the concept of fair hearing, age or the level of education, sex must not be a barrier otherwise it will be said that the person denied had suffered discrimination which is a violation of his / her right as a citizen of Nigeria.

Section 179 of the Evidence Act 2011 states that: All persons shall be competent to testify unless the court considers that they are prevented from understanding questions put to them or from giving rational answers to those questions by reason of tender years, extreme old age, disease whether of body or mind or any other cause of the same kind.

Consequently, court is a public place and it is opened to everyone, therefore, regardless of age, everyone, has a right to giving evidence in court provided he has an understanding of the matter pending before the court. So, the court only needs to ensure that the child understands the question puts across to him/her. That is what is required. He is a person who suffers no disability on account of the law or is not exempted by the provisions of the law from giving evidence

For justice to be earned, there must be witnesses coming to give evidence, without which, it may be difficult to achieve true justice in most cases or situations, this is so because a witness is an essential source of information which helps in unravelling the hidden truth about any case, if the witness of teenager is rejected by the court, it means offenders in cases where teenagers are the only witnesses will not be prosecuted in the court of law. It must be stated that the role of witnesses in any case cannot be under estimated or over estimated as they enable the court to use its discretion in arriving at a reasonable decision that will bring about the dispensing of true justice.

Under our legal system which is adversarial in nature, parties are required to tender material evidence to establish the facts-in-issue upon which their claims, charges or defences are based. By giving evidence linking to the claim, charge or defence, the witness performs a duty of assisting the court to discover the truth of the matter.

The law is clear in section 209 of the Evidence Act where it indicated that in any proceeding in which a child who has not attained the age of 14 years is tendered as a witness, such child shall not be sworn and shall give evidence otherwise than on oath or affirmation, if in the opinion of the court, he is possessed of sufficient intelligence to justify the reception of his evidence and understands the duty of speaking the truth.

Similarly, it went further to state that a child who has attained the age of 14 years shall, subject to Sections 175 and 208 of the Act give sworn evidence in all cases.

1) Whether the child is possessed of sufficient intelligence to be able to understand questions put to him rationally to justify the reception of his evidence; that is, does he understand the duty of speaking the truth? The court does this by putting preliminary questions to the child which may have nothing to do with the matter before the court. If the answer to the first investigation is in the negative, then the child cannot be a witness at all in the case. If the answer is in the affirmative then, the Court proceeds.

2) Whether the child understands the nature of an oath. This second investigation is also determined by the putting of questions to the child as to the nature of an oath such as asking him about God and what will happen to one who tells lies after being sworn, etc. If he fails in this respect, he will nevertheless be able to give evidence, but will not be sworn.

The Supreme Court’s decision in the above case was in line with  Section 209(1) of the Evidence Act.

Evidence is the bedrock upon which judicial proceedings stand, it is the key that opens the road to justice but the question is: can a child’s evidence be admissible in court of law?

First and foremost, in order to answer the aforementioned question perfectly,  it is integral to know the definition of a child under the Evidence Act, according to the Evidence Act: a child is a person below 14years of  age.

Generally, all persons are competent to testify in a judicial proceeding, this is clearly stated in section 175(1) of the Evidence Act 2011.

However, a minor may be incompetent to testify as a witness in a judicial proceeding unless it is substantially proved by the judge that:

1. The child has ability to give  rational answers to the questions put forward to him.

2. The child also appreciates  the need to speak the truth and sufficiently comprehends the nature of oath. See section 175 of the Evidence Act 2011.

Thus, a court is required to conduct a competence test to such a witness before receiving his testimony, for instance, the court may ask such a minor, whether he knows the implications of telling lies or in other words, is it good to lie? If he says no, the court may further ask him where does he who lie go to? Heaven or hell fire? To sum it up, such questions should be unconnected with the matter at hand.

On the whole, it is pertinent to appreciate the fact that the outcome of the competence test must be recorded down by the court. See Okon Vs. State(1988)1 NWLR(PT.69)177.

Ordinarily a child who has not attained the age of 14 will not be allowed to give evidence in Court but once the Court is satisfied that the child possesses sufficient intelligence in appreciating the duty of speaking the truth, at times this can be achieved by asking such child ‘Can you tell this Honourable Court whether it is right to lie’ if the Child now says it is a sin or crime to lie and goes further to condemn the act of lying then a court may be satisfied and permit such child to be sworn to oath or affirmation depending on the child’s religious beliefs.
No Court of Law should rely on a child’s evidence alone to convict a defendant but when a child gives evidence and the Court discovers that the evidence is reliable and convincing, it is not expected of that court to just place reliance on such evidence by convicting on same alone rather such evidence of that child must be corroborated by some other material, cogent, verifiable and reliable evidence before it can be admissible by any court of Law against any defendant, Sections 209 (1) (2) (3) of the Evidence Act, 2011 illuminates this legal perspective of the admissibility of a child’s evidence.
It is however worthy of note that if a child’s evidence is received and it is discovered that the child wilfully gives false evidence, such child will be charged to court for committing perjury (lying under oath punishable under Section 191 of the Criminal Code Act, Cap ”38” Laws of Federation of Nigeria, once his guilt is proved, then conviction and sentencing follows and the child will face the punishment of Seven (7) years term of imprisonment) again Section 209(4) of the Evidence Act, 2011 resonates this legal position.

There is an established law that a child who has not attained the age of 14 years is not competent to give sworn evidence. It is also clear that if a child is below 14 years of age or a young teenager, his evidence shall be unsworn provided he is possessed of sufficient intelligence to justify the reception of his evidence and he understands the duty of speaking the truth unlike before in Section 183 of the Evidence Act 2004 which failed to state the age range of who is a child; as such, a definition was sought in other laws, and only applied to criminal proceedings.

The 2004 Act only applied strictly in civil proceedings to the effect that a child witness, either or below the age of 14 years, must understand the questions put to him, giving rational answers to those questions, and understands the nature of an oath. The criticism of this provision under the 2004 Act emanated from the question whether a child who is statutorily disqualified from giving evidence on oath will be required to “possess of sufficient intelligence to justify the reception of his evidence and understand the duty of speaking the truth.”

However, Section 209 (2) makes it explicit that a child who has attained the age of 14 years shall give sworn evidence in both civil and criminal proceedings. This provision is made subject to the provisions of Section 175 and 208 of the same Act. This means:

1) Even for a child, who has attained the age of 14 years to give sworn evidence, he must understand the questions put to him or give rational answers to those questions and also understand the nature of an oath.

The law of evidence has specified cases where children are competent, but not compellable or where they are both competent and compellable.

The competency of a child to give evidence is determined by a test of intellect. This is so because, in a criminal trial a child will be competent to testify provided he or she can understand the question he is asked and can give understandable answers to them. But in civil trials, a child will be component if he or she satisfies the test for taking an oath or the test as contained under the children’s and Young Persons’ Act (Section 96 of the CYPA, Cap. C 24 LFN, 2004) for giving unsworn evidence and Section 209 (3) of the Evidence Act, 2011.

It was further established the fact that the new Evidence Act, 2011 has brought about some positive changes such as abolition of oaths test before a child can testify in court and permit a child who is 14 years old to give sworn evidence. These improvements are commendable but they have further created the problem of competence and compellability of children’s testimony by providing that all other children below 14 years of age can only give unsworn evidence which unsworn evidence cannot be acted upon by the court unless it is corroborated, and no person can be convicted upon uncorroborated and unsworn evidence of a child.

Can husband be prosecuted for raping his wife?