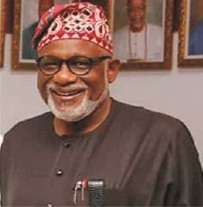 By Mary Agidi & Adekola Afolabi
|
Ondo State Governor, Arakunrin Oluwarotimi Akeredolu, has reassured of the commitment of his administration to build a Cancer Diagnosis and Treatment Centre within the premises of the Federal Medical Center, FMC, Owo.

Addressing a mixed audience at a Town Hall meeting in commemoration of the 2020 World Cancer Day at the Federal Medical Center, Owo, yesterday categorically expressed his determination to ensure the delivery of the project.

The year 2020 World Cancer Day Celebration with a theme, “Am and I Will”, was organised by the Ondo State Chapter of Coalition Against Cancer .

Governor Akeredolu who used the occasion to commend his wife for her untiring efforts on gender balancing through diverse strategic advocacies for the empowerment of women and development of girl-child, said the Sunshine is blessed to have her at this time.

While advocating a life style with utmost self restraint and faithfulness to a single partner as part of a preventive measure to the scourge of cancer, Governor Akeredolu said his administration would continue to engage credible organisations and platforms for effective sensitisations.

The three Resource Persons who made presentations on Breast Cancer, Prostrate Cancer and Cervical Cancer harped on regular check as early detection of the cancer remains the only means by which it could be cured.

In their goodwill messages, the Chief of Imam of Owo, Alhaji Ahmed Aladesawe appreciated the State Governor for the developmental strides of his administration which according to him have imparted lives of residents of the state.

In her remarks, Mrs. Akeredolu commended committee members of the Coalition Against Cancer and support donors, stating that cancers in general was the rationale behind the formation of CACIN, while emphasising the need for organisations to team up against the disease, in order to achieve the desired result.

She advocated Clinical Breast Examination to achieve reduction in late presentation of cancer attack, and tha the awareness about mammography should be improved upon.

In his welcome address, the chairman of the Coalition Against Cancer in the state, Dr. Aba Katung noted that the campaign against cancer initiated by Mrs. Akeredolu had been yielding positive outcomes, saying that the formation of the coalition would create a paradigm shift in cancer control in Ondo State.

He stated that there is no clear cancer policy, considering the low rate of the implementation of National Cancer Control Plan in Nigeria, adding that the N725million set aside for the treatmentof cancer by the Federal government was insufficient.

The Chairman of the occasion, Dr. Friday Okonofua, Vice-Chancellor, Ondo State University of Medical Sciences, said he was impressed with the pace of fight against cancer spearheaded by the wife of the governor.

Chief Imam of Owo, Alhaji Aladesawe commended the efforts of the wife of the governor in the campaign against cancer.

The Olowo of Owo, Oba Ajibade Ogunoye urged his subjects to take advantage of the quality presentations made at the programme by imbibing a lifestyle  that will make them  live in sound health.

He advised the people of Owo to give adequate support for the current administration, while highlighting some of achievements of the government.