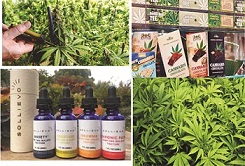 Cannabis: From bad to good

By Kayode Adegbehingbe
|
W hen the news broke that the Ondo State Governor, Arakunrin Oluwarotimi Akeredolu went to Thailand with the Chairman, National Drug Law Enforcement Agency (NDLEA), Colonel Muhammad Abdullah (rtd.) to study how Cannabis (also known as marijuana/Indian hemp) can be put to good use, it marked a turning point in the discussion about the herb in the nation.

The programme they went to study was: “Medicinal Cannabis Extract Development.” The story actually divided the nation into the for and against camps, as people weighed in on the issue.

Some people, in a knee jerk reaction lampooned the governor for even thinking of such a thing. They think the idea will become a slippery slope and we would be in danger of having everyone getting high on the streets and the psychiatric hospital would become overwhelmed as a great number of people lose their minds to the free accessibility of the narcotic on the street. In their minds, what the governor is talking about is akin to legalising the wide use of the illicit herb by all who want to smoke it.

The ‘bad’ of cannabis is the basis for the legal framework mandating the curtailing of the cultivation and use of the substance because of its psychedelic (mind altering) effect. This necessitated the establishment NDLEA, which has been at the forefront of the fight against the cultivation and the distribution of the narcotics.

Ondo State is known as the largest cannabis producer in Nigeria, and NDLEA has been in a running battle with cultivators, sometimes leading to loss of lives of its officers.

But in the wake of the Ondo State Governor’s visit to Thailand, many positives have been brought to the fore about cannabis, specifically about the health benefits of cannabis oil, and its economic potentials. And the government is saying that with a controlled cultivation of a special strain of cannabis, specifically for the oil, the country would be tapping into a gold mine.

Scholars from the Adekunle Ajasin University, Fadero Oluwafemi and Olaseyo Toyosi, in a write-up said that Marijuana for many years was harvested primarily for its strong fibres employed in the production of pots, ropes, cloths, bags, ship sails, bread. Other uses include as a renewable energy carrier production and consumption, its biomass as source of energy, as biogas substate, as bioethanol substrate. This is apart from the many possible health benefits.

Information from government sources reveal that there are companies that are lined up, ready to set up factories where cannabis oil will be extracted, taping into its multi-billion dollars global market.

The economics of the new proposal which would necessitate the ending of the wholesale vilification of the product came to the fore when senior officials of Nigeria Prisons Service paid a visit to Governor Akeredolu.

They were on a five-day study tour of Ondo State, with the theme: “Commercial cannabis growing in Ondo State: A panacea for ecnomic emancipation from over dependence on federal allocation.”

They were informed during their training that cannabis have benefits in 71 chronic ailments and would go a long way to reduce dependence on oil as a source of foreign exchange for the country.

The leader of the 28-man group, Acting Assistant Controller General of Nigeria Prisons, Mr. Benson Oluwayiopese said: “We were told in this training that it should be restricted as it was done in Thailand. It must not be grown widely, but restricted. We were also made to understand that in Thailand, the type of cannabis the state Government advocates is not the type of marijuana that causes mental derailment.

“We were told that a litre of cannabis oil goes for thousands of dollars. I just want to advice that if government can buy into the idea, it would move the economy forward.”

The global cannabis market is expanding and 50 countries have given a nod to the legal cultivation in one way or the other. It is also interesting that a big part of the world population reportedly suffer from ailments that are purportedly treatable with medicinal cannabis.

It is adjudged the fastest growing industry in the America and some of its universities are including cannabis studies in their course offerings. The courses are targeted to help the students prepare for cannabis related careers.

The world is already catching the cannabis bug, as the plant is moving from the back street to the main street. And one of the objectives for the Ondo state government in seeking for the foreign companies to set up cannabis oil factory in the state with controlled cultivation of special species, is to position the state to take advantage of global market in medicinal cannabis with federal government’s buy-in.

The problem with the negative reaction to this initiative is that when people think of cannabis, the image that comes to them is of people deranged from smoking the dried leaves of the plant. They do not listen carefully to realise that it is the oil, called cannabidiol, which can be applied for medicinal purposes, with huge economic potential that is the focus.

It requires special technology to bring oil from the cannabis, far removed from just planting, drying and smoking the substance.

While still putting pressure on the illicit smokers and producers of Indian hemp, the nation can take steps to establish itself as a player in legitimate global cannabis oil business, and there is a willing partner in the forward looking Ondo State Government.

People have said that the whole proposal can boomerang and explode in everyone’s face, saying Nigeria is notorious for not being able to manage anything.

But this would not be a Nigeria thing as it were, rather, it is about foreign investors who are ready to put their money in the business that they will manage. We see this in the coming in of the GSM telecommunications technology in the country, where the government created a policy framework defining their operations, and the result is plain for everyone to see. It has endured for years now and growing in leaps and bounds, revolutionising the economy and the way of life of the people.

Just as many do not question how they are able to communicate with hand held phones with someone afar off via GSM technology, but have been enjoying the benefits, also, one should not reject the whole notion of turning cannabis to oil, just because it is something one does not understand, being not well educated in that arena.

The benefit of cannabidiol (CBD) is globally acknowledged, fuelling the demand for the product.

According to industry experts, Getting CBD is different from being served hemp and marijuana to smoke.

There are two main compounds in cannabis. They are cannabidiol (CBD) and tetrahydrocannabinol (THC). CBD is responsible for the health benefits, THC is what gives the psychoactive effects of marijuana. So technologies has been created to produce products that have very low or zero THC.

Let’s compare it with electricity. When not properly channelled, it can lead to death, but otherwise, everything is enhanced and people are happy, as it transforms the economy. Cannabis has the potential to do this also, and is something we should not shy away from, so that we would not be left behind due to parochial thinking.

Getting pure and high quality oil is the priority of those in the cannabis oil industry. Different technologies are employed to ensure this. Examples are: Thermal extraction, Bioethanol extraction and Super critical CO2 extraction.

So those who think the controlled cultivation of cannabis for its oil is opening the Pandora’s box need to do a rethink. Because you don’t understand something does not mean that you should vilify it.

Rather we can learn to grow and not continue to have our perception caged by ignorance.

According to reports, CBD products that do not contain any THC even fall outside the scope of the US Drug Enforcement Agencies Controlled Substance Act. So there, they make a distinction between cannabis products with THC and those without. It has also been established that while THC is associated with addiction, CBD doesn’t appear to have the same effect.

According to Governor Akeredolu, “It is the mission of the current administration that the state can benefit by ensuring that only licensed people are allowed to grow and cultivate it in a regulated areas for the purpose of extracting hemp oil for exportation.”

Putting in his two cents on how it can be regulated, Head of Pharmacy at Ondo State University of Medical Sciences Teaching Hospital Complex, Dr Adeyemi Adegoke, said: “There should be a specific authority licensed to manage and a regulatory body to control the whole process.

“So those who are growing cannabis, if they are given license and the regulatory body is ready to work with all sincerity and it is being monitored in such a way that there is no selfish interest, you will see that it will surely help the system and boost our revenue.”

An Abuja based legal practitioner and an indigene of Ondo State, Kayode Ajulo, while weighing in on the legal implication of cannabis cultivation in the country, revealed that a careful reading of the 1961 Single Convention on Narcotic Drugs (to which Nigeria is a signatory) reveal that Narcotics may be used by signatory states for research and medicinal purposes.

According to him, cannabis plant or its resin or extract with THC content lower than 1percent is considered as CBD (medical) and not psychoactive.

The schedule states: “A party shall, if in its opinion the prevailing conditions in its country render it as the most appropriate means of protecting the public health and welfare, prohibit the production, manufacture, export and import of, trade in, possession or use of any such drug except for amounts which may be necessary for medicinal and scientific research only, including clinical trials therewith to be conducted under or subject to the direct supervision and control of the party.”

Ajulo concluded by saying: “Having considered the benefits accruable to the production, sale and use of marijuana, it is hereby recommended that the National Assembly should be lobbied to amend the provisions of the NDLEA Act and other relevant laws in order to make room for the legal production, manufacturing, sale and use of marijuana in Nigeria which in turn can boost the economy of the nation as a whole. The NDLEA should also enforce the provisions of 1961 Single Convention on Narcotics Drugs and allow the use of marijuana for medicinal purposes.”

The Ondo State Governor said concerning the cannabis market billed to become a $145billion market by 2025, that: “Our focus now is medical marijuana cultivation in controlled plantations under the full supervision of the National Drug Law Enforcement Agency. I strongly implore the FG to take this seriously, as it is a thriving industry that will create thousands of jobs for our youths and spur economic diversification.”

But this can only happen if the economic potential of the good use of marijuana is at the fore front of arguments for a rethink in how marijuana is viewed in the country.