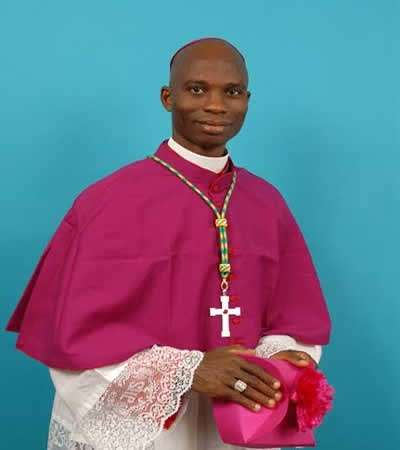 Victor Akinkuolie, Ado-Ekiti
|
Catholic Bishop of Ekiti Diocese, the Most Rev. Felix Ajakaye, has advised Governor Kayode Fayemi to appoint the right people into government positions to help him better the lives of the electorate.

The bishop said Fayemi’s second coming to power offered him an uncommon opportunity to make a difference in the lives of the people of the state.

The cleric gave the admonition yesterday at a Thanksgiving Mass held at St. Patrick’s Catholic Cathedral Church, Ado-Ekiti as part of activities to mark Fayemi’s inauguration.

Ajakaye also urged Fayemi to put an end to government sponsorship of people on holy pilgrimages which he said is being used by some individuals for their selfish ends.

He also commended the governor for abolishing the education levy imposed by the immediate past administration on pupils in both private and public schools in the state.

The bishop said Ekiti Catholic Diocese challenged the imposition of the levy in the interest of the people even though the State High Court struck out the case on technical grounds.

He disclosed that the Court of Appeal, to which the church filed an appeal had returned the case to the lower court for reassignment to another judge for fresh hearing.

Ajakaye said despite the fact that Fayemi had announced the cancellation of the levy, the church would still follow the case to a logical conclusion because “a Pharaoh may rise in the future who may not know Joseph.”

Describing Fayemi and his deputy, Otunba Bisi Egbeyemi as a “united team and co-travellers in the journey of restoration,” Ajakaye said they need patriotic, committed and trustworthy people who will assist them to lift Ekiti higher.

Ajakaye said: “Your Excellency, appoint the right people in right places. If I am not appointable, don’t appoint me even though as a priest, I am not looking for any appointment.

“Don’t appoint such people to positions of authority. At the end of our sojourn on earth, everybody will give account of himself/herself to God.

“This is your second missionary journey, it is not a vengeance mission, and vengeance belongs to God. The journey of restoration is not a journey of vengeance so appoint the right persons to positions because we will hold you accountable.”

Responding, the governor said he desired to come back to power to make a difference in the lives of the people.

Fayemi promised to listen to people and carry them along in every step he takes promising to diligently serve all Ekitis irrespective of political affiliation, religion and other differences.

He said: “There are huge expectations across the length and breadth of Ekiti State, some people believe that our challenges will disappear immediately.

“Everything will bear fruit at appropriate time, the only reason we ventured into this is to make a difference in the lives of our people, to serve and not to be served.

“Power of the people is greater than the people in power. We shall listen to counsels, if there is anything you think is not appropriate to do, bring it to our notice, we shall serve you.

“From our royal fathers, to the lowliest, we are determined to make a difference in the lives of our people without preference to any religion or any other difference.

“If we make any mistake, forgive us, we have a job to do. This is a collective rescue mission, this is a mission to reclaim our land.”