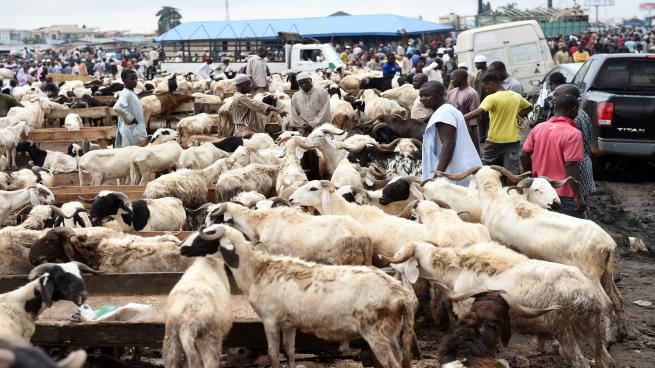 TOMORROW marks  Eid al-Adha, more popularly known as a Eid el -Kabir. It  means “Feast of the Sacrifice”, signifying prophet Ibrahim’s willingness to sacrifice his only son. It is also the occasion that marks the culmination of Hajj in Islam.

THE federal government has declared Tuesday and Wednesday as public holidays to mark the Sallah celebrations. The Minister of Interior Affiars, Mr. Abdulrahman Dambazau in a statement wished  Nigerian muslims  a happy Eid-el-Kabir celebration and enjoined  muslim faithful to  use the period to embrace the virtues of love and sacrifice for the unity and development of the country.

MORE than a billion muslims worldwide celebrate the festival which started over three thousand, five hundred years ago when God  asked prophet Ibrahim to sacrifice his only son,  Ishmael.

BOTH father and son had submitted themselves to the will of Allah, but Allah ransomed the son  with a  ram and thus  overcoming the  epic trial. Prophet Ibrahim’s  obedience of total submission to Allah and a proof of complete obedience to Allah’s will and hence  the sacrifice of an animal became an obligatory duty to be performed by every well-to-do Muslim.

EID-EL-KABIR is  to commemorate the willingness of Prophet Ibrahim  to sacrifice his son. The sacrifice of an animal has always been treated as a recognized form of worship in all religious orders originating from a divine book.

IT is imperative to remember that the occasion symbolizes piety. This act of godliness, as exemplified by Prophet Ibrahim  calls for perpetual sober reflection, submission to the will of Allah, and sincerity of purpose from all of us.

THE lesson to learn from this is, it teaches forbearance, hope and strong faith in Almighty Allah who rewards  in this world and more so ultimately in the Aljanah.

WE  therefore enjoined muslims faithfuls to firmly hold on  to this eternal directive, and in the process reap bountifully  from  the blessings of prophet  Ibrahim,  as revealed by Allah, to all of His messengers and prophets, which is unconditional acceptance of, and unreserved submission to his  directives .

WHILE  only pilgrims performing Hajj in any particular year observe the rites of that fifth pillar of Islam, the rest of the Muslim world join in celebrating the culmination.

THEY must have absolute sustainable belief and total submission to the will of Almighty Allah, give charity and love our neighbours.

WE believe that the menace of Boko Haram, Fulani herdsmen and other  security challenges  as well as the numerous forms of corruption bedeviling our society and the resultant implications of these on  the economy are nothing but results of lack of consciouslessness  of ultimate accountability to God, especially in the life after.  This is also true of the mistrust that hinders cordiality among our various ethnic and religious groups.

WHAT Nigeria needs, as  a nation, are sincere, concerted and sustained efforts towards propagating the kind of God-consciousness demonstrated by Prophet Ibrahim . This  will surely guarantee for our nation and for us as individuals a lasting solution to all the challenges confronting us and our country, Nigeria.

WE  wish our muslim brothers and sisters,  Barka da Sallah!