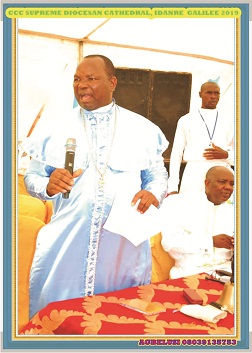 By Sade Afe
|
The Founder of Supreme Special Diocesan Headquarters Cathedral of Celestial Church of Christ, Odode Idanre, Ondo State has recently assured all members of the church that the rift in the church will soon become a thing of the past.

Most Superior Evangelist Emmanuel Akinyele Oki gave this assurance during this year`s annual Galilee programme of the church held in the Cathedral premises along St. Joseph`s` Grammar School, Idanre.   Oki who had been in the Celestial Church fold for over forty seven years  said that the Reverend Pastor Gabriel Beni Omoge (Pastor of Celestial Church of Christ Worldwide) is working tirelessly to ensure that the church comes back to the United State it was before through the numerous structures  he is putting in place to make everybody come together.

While affirming that things would soon become normal, he said the Idea of having a general university where all the children and students from the Celestial folds will attend without any segregation is being vigorously pursued. The university which is sited along the Ibadan/Lagos Expressway which is to be called Golden City is one of the developmental projects that are meant to facilitate the unifying efforts as it was not being built for any faction of the church, but for the Celestial Church Worldwide.

Earlier, while making the opening speech to kickstart the Galilee programme, Superior Evangelist Anawoye Amos, the Baba Ijo of the Cathedral , who also led the opening prayer briefly traced the journey of the church which started with only ten foundation members in 2001 in a very tiny cocoa store but now parades over a thousand members in a big Cathedral with modern facilities and with plan to relocate soon to a more spacious environment to adjust to the ever rising population of the members.

He used the opportunity to appreciate the numerous sterling leadership qualities of the Founder and Shepherd, Most Superior Evangelist Dr.  Emmanuel Akinyele Oki, that had been making the church wax stronger with more souls being added to the kingdom of God daily. He opined that the Cathedral would soon become just a parish under a bigger one that God will soon provide.

In his sermon, Most Superior Evangelist Oki said the death and resurrection of Jesus Christ taught us, christians, eighteen different lessons that touch us all, irrespective of our societal classes in one way or another. He called on christians to be more united now that it looks as if the coming of Jesus Christ is nearer. He condemned the lukewarm and hypocritical attitudes of christians of today as he said that many christians indulge in practices which ought not to be found among those who genuinely profess to be born again. The Shepherd called for more dedication and reminded the members that the rate and pace of spiritual development of individuals vary and hence should not envy others. He concluded his message by calling on parents, especially women, to be more honest and dedicated to their parental responsibilities and shun infidelity.

One of the guests who came from another parish, Celestial Church of Christ, Oke Iyanu Parish, Superior Evangelist Akinlayo Akinrinlola extolled the virtues of Most Superior Evangelist Oki which had been making his ministry to thrive despite occasional differences by some few people who do not move at his pace or share his ideology. He said there was no way the history of Celestial Church could be complete in Idanre and even in Ondo State without prominent reference to Most Superior Evangelist Oki because of what he had done to establish the church over the years.

He enjoined the members of the church to keep cooperating with their founder who, he said, had been giving them good foundation and sound spiritual development.  He opined that those still against the Shepherd`s philosophies will soon come back to the fold.

Speaking in the same vein, Superior Evangelist Idowu Joseph who came with him, said they keep following Shepherd Oki because they keep seeing him as a honest and well meaning leader.

There was Bible Quiz competition during which winners from the various categories were given prizes as the programme also featured dancing competitions among various groups which also made the winners dance home with prizes music was supplied by the church choir. Other members of the church who distinguished themselves with notable performances were also given prizes.

Refreshments were adequately supplied for members and visitors before the programme which lasted for about seven hours came to an end with the grace shared together.