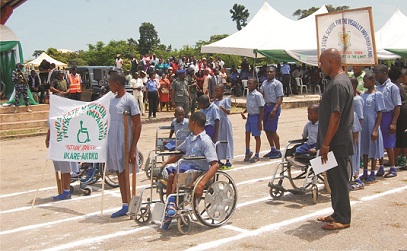 By Josephine Oguntoyinbo
|
Ondo State Governor, Arakunrin Oluwarotimi Akeredolu has decried  the high rate of drug abuse among school children in Nigeria and called for concerted efforts to win the war against drug abuse.

Akeredolu who spoke at this year’s Children’s Day celebration held at the Gani Fawehinmi Freedom Arcade, Akure, the Ondo state capital, said the high rate of drug abuse among school children called for urgent action to save their future.

He solicited the support and cooperation of relevant stakeholders including parents, school administrators, traditional rulers, religious and community  leaders, security agencies, market men and women and the children themselves in the war against the disturbing trend, noting that governments alone cannot do it.

The governor  reiterated that the  promotion of qualitative education and the general well-being of Ondo State children remained a top priority in his development agenda for the state.

He observed that government efforts in the areas of massive construction and rehabilitation of schools and roads throughout the state as well as school feeding programme for the comfort of school children would amount to sheer waste if the children continue to engage in drug abuse.

He said the theme of this year’s event with the theme: “Drug Abuse Among Children: Addressing the challenges”, was very apt as the celebration was being used to mount a serious campaign against drug abuse among children.

He further called for sustained advocacy, stressing that children by nature are highly vulnerable, thus making it relatively easy for them to fall victims in the hands of drug addicts who by all means want to win new converts.

He also disclosed that necessary steps are being taken by government which include Mobile Community Sensitisation and Mobilisation Services recently introduced by the state Ministry of Women Affairs and Social Development to further address the menace of drug abuse among children.

Meanwhile, all special schools in the state went home with prizes while the best behaved school prize went to Bolafoluwa Secondary School, Akure.

Earlier in his address read by Governor Akeredolu, President Muhammadu Buhari, who congratulated the children on the special day advised them to stay away from using abusive and addictive substances and concentrate on their studies, as his administration would ensure a conducive learning environment for them to develop their potentials.

According to the president, the ongoing school feeding programme would continue to ensure that more children in public schools enjoy at least, one nutritious meal every day, adding that the Trader Moni, and other interventions put in place are also there to support the parents to cater for their needs.

Highlights of the event were march past parade by various schools and presentation of prizes and certificates to participants.

Earlier in her welcome address, the Special Assistant to the State Governor on Women Affairs, Mrs Titi Adeyemi explained that the celebration is held annually to give special attention to issues concerning children and to enable all stakeholders assess and strategize on how to bring such issues of concern under control.

In his goodwill message, the state Commander, National Drug Law Enforcement Agency (NDLEA), Mr Haruna Gagara commended the state government for recognizing the devastating consequence that drug abuse can have on children if not checked.

Speaking with The Hope, the Permanent Secretary, State Ministry of Women Affairs and Social Development, Mr Alaba Adeyemi affirmed that the celebration in the state has been filled with a lot of activities and programmes in the last ten days  which is a clear demonstration of the concerted effort of the state government to ensure that the children occupy a place of pride among their peers in the future.