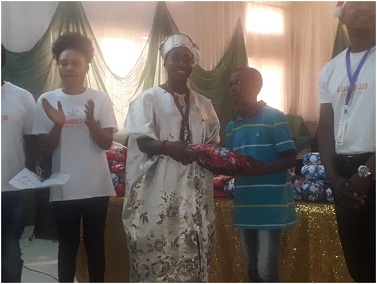 Yeye Otunba Aramide Ojo (M), presenting a gift to student with the best academic performance, Ibrahim Ojo, while others watch

Aramide Ojo Foundation, an NGO with a passion for the young ones, last week, put smiles on the faces of hundreds of children in Owo, headquarters of Owo Local Government, as it held a Christmas Carol and party for them.

The event which held at the Aruwajoye Event Centre, Iyere Road, Owo was a colourful one which attracted children from all the schools, both secondary and elementary, across Owo.

The event which was  held for the second time had its first in 2021 when a Christmas party was held for 200 children and 200 elderly people.

However, this year’s edition was spectacular as it was held solely for the young ones.

Aramide Ojo Foundation, has over 50 secondary school students across the eleven schools in Owo under its scholarship scheme.

In the Senior Secondary School category, Ibrahim Ojo, an SS3 student of Imade College, Owo, emerged the student with the most outstanding academic performance and got a laptop as his prize.

Speaking with The Hope immediately after the event, the founder and Chief Executive Officer of Aramide Ojo Foundation, Yeye Otunba Aramide Ojo disclosed that the foundation is all about making sure children every child feels and sees that they are loved.

Yeye Otunba Aramide Ojo said she was moved by the fact that not every child is privileged to fund his or her education and so they needed to be encouraged to do so.

She disclosed that through the foundation, she has been giving scholarships to this category of students.

Meanwhile, the husband of the founder of the foundation, Otunba Taiwo Olayisade Ojo has promised to support the passion of his wife for children.