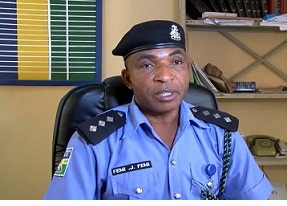 By Michael Ofulue
|
The Ondo State Police Command has warned against indiscriminate shooting of bangers ,knockouts and other explosives in major streets in the state, as anybody caught would be arrested and prosecuted.
The Command said the law banning use of explosives before, during and after the  yuletide season is still in force, just as it advised parents to watch over their children and wards in order not to be used as scapegoats if arrested.
The state Police Public Relations Officer, Mr. Femi Joseph, who spoke with The Hope Metro disclosed that the police would not hesitate to bring perpetrators to book and ensure that they are punished for disturbing the relative peace being enjoyed at the moment in the state .
He stated that policemen on surveillance and patrol were  going round to ensure that they apprehend those behind the use of explosives that are tantamount to threat to peace and security of the state.
Joseph, while saying that adequate measures had  been taken to make the yuletide celebration  a crime free exercise, added that all identified flash points across the state have been adequately policed.
The PPRO called on the general public to be security conscious during the festive period, adding that the command is determined to bring crime and criminality to the barest minimum.