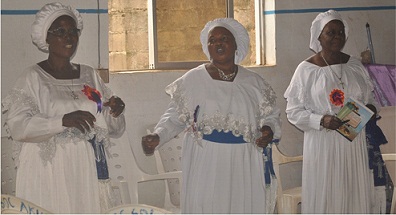 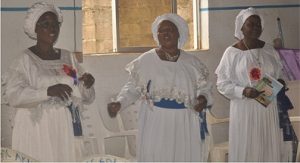 By Maria Famakinwa
|
The week long activities to mark the 13th Adult Harvest Thanksgiving of Celestial Church of Christ, Soldiers of Christ Parish titled Harvest of Rejuvenation which brought together members of the church from far and near has been described by many members of the congregation as another way to thank God for his goodness and mercy upon them.

The event which took place at the church auditorium in Akure, started with health talk by Ondo State Consultant, Community Health Physician, Dr (Mrs) Aderonke Fagbemi who educated the congregation on principles of healthy living. According to the Doctor who quoted World Health Organisation (WHO), described healthy living as a state of complete physical, mental, social wellbeing and not merely the absence of disease.

On what the  lecture was about, the Consultant said that it would sensitise the people on what to eat at the right time, importance of daily exercise, when and how to take normal rest, the risk involved in taking alcohol and cigarettes.

Dr Fagbemi further revealed that the importance of the health talk was to emphasise on prevention so that people do not wait until when they fall sick before going to the hospital.

The medical practitioner also appealed to people to have the right attitude towards their healths as she maintained that nothing can be achieved when one’s health is down because health is wealth.

The grand finale of the Adult Thanksgiving was on Sunday, 19th August which started around 10am with members dancing and praising God for sparing their lives to witness another harvest. The Preacher,  Asst. Sup. Michael Agbo who took his first sermon from the book of Mathew chapter 13 verses 36-40 urged the congregation to bear good fruits in order to reap the good fruits of harvest.

While urging the people not to accept another teaching aside that of the Bible, quoted from the book of Galatia chapter 1 verses 1-9 that the Lord warned whosoever add a different teaching against the teaching of the Bible would be cursed.

In the word of Shepherd of Soldiers of Christ Parish, Sup. Evang. Olu Adeyemi explained that the reason for the harvest was to thank God and also reminded themselves of the coming harvest of the Lord Jesus Christ.

On his message to the congregation, he appealed to them to turn to God and not to allow the mundane things of this sinful world rob them of their heavenly joy and glory. “Let everyone go back to God. The world has turned upside down, we are not doing what God commanded us to do.

While also describing a season of harvest as another opportunity to appreciate the goodness of God in the lives of all the church members and to return all glory to him for his safety and sustainance to witness another harvest, the Senior Special Assistance to Ondo State Governor on Women Affairs who is also the wife of Sup. Evang. Olu Adeyemi, Mother Celestial Titi Adeyemi said “Harvest is a period of thanking God for all he has done for the past one year considering the many challenges of this world but God has been so faithful to see us through since last year, so we have every cause to give thanks to him which is the whole essence of harvesting.”

On her advice to the congregation and christians in general, Mrs Adeyemi charged them to trust in God and continue to give God thanks instead of being worried. “I also have a message for women in particular because they are the custodian of the society and the home builders, hence, they must ensure that they do things that are pleasing to God which start from how they care for their children because they owe it a duty to bring up their children in the fear of God.

The SSA to the Governor further urged Christians to live a life of emulation by making the Bible their standard and shun any act that can bring the name of God into disrepute in their lives because Christians are expected to live exemplary lives free of sin. She thanked everyone for coming to the thanksgiving harvest.