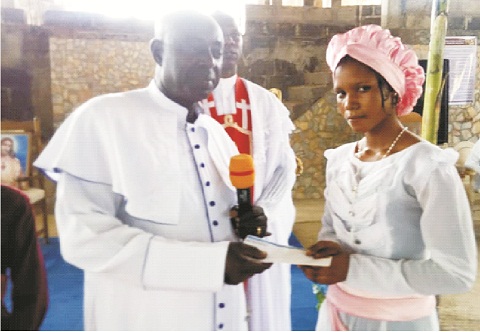 By Bamidele Kolawole
|
A philanthropist, Primate/Prophet, Sunday Ojuolape, has given out scholarship to students of secondary schools in Akure.

Giving out the scholarship during the weekend, Ojuolape said that he was not opportuned to be what he wanted to become educationally, which made him decided that since God has lifted him, he would always assist the less privileged to get to the peak of their careers.

“I feel happy whenever I am doing this, because by helping the needy, you are preparing for heaven. All what I am doing is for eternity, not for this world”.

According to him, so many students have benefited from the scholarship scheme in his church, saying

“people graduated from different universities and polytechnics through the scholarship.

“I give out scholarship every year. For those students that benefitted this year, it will take them throughout their secondary level,” he said.

Ojuolape noted that, by doing that, a lot of help has been coming from different people from far and near and that God has been promoting his church.

The cleric stated that Christ Living Church, Agbala Oluwayoose, started operating as far back as 1987 and the church has been receiving God’s blessing since it started.

Apostle Adedeji Mayowa, who brought two students that benefited from his church, Episcopal Church of Cherubim and Sherapim of Zion Akure, branch 1, said that words were not enough to express how he felt about the scholarship.

According to him, it is not the first time they have been receiving the scholarship from the church.

He prayed that God should keep and bless the man of God and strengthen him the more.

According to him, if other men of God could be like prophet Ojuolape, Nigeria would be better for it.

Daniel Timileyin, an SS 2 student of Olubade Educational Academy and one of the beneficiaries said she was happy with the scholarship.