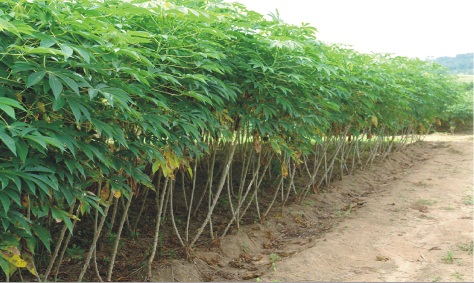 Cassava farmers have declared that climatic change being experienced is drastically reducing Cassava production.
Chairman of Ondo State chapter of the Nigeria Cassava Growers Association, Mr. Fela Olorunimodimu stated this when he spoke with The Hope in Akure.
He said weather has not being favourable which did not allow much cultivation last year.
“We had Government Intervention through the Central Bank of Nigeria (CBN), the Agricultural Development Project (ADP) in the Anchor Borrowers programme to cultivate 5,000 hectares for 1,000, but could not get one quarter of the expectation due to climatic change.”
He also said they faced challenges of non availability of cultivable land, saying several of their lands cleared over 10years ago have got back to what he described as secondary bush.
This, he observed has reduced the number of cultivated hectares from about 200 and 500 to 40 and 50 hectares.
“So it was a great setback on the project. If we have good cultivable land starting from this year, we would be able to do much more to meet our target.”
He said cassava farmers are benefitting greatly from Federal government’s programme.
He said cash and agrochemical inputs were given to about150 farmers to cultivate while about 2,000 farmers are awaiting approvalthis year to cultivate an hectare each.
While reacting to the high cost of cassava flake (Garri), Olorunimodimu attributed it to the season and cost of production.
“Around this time, garri always goes up because of the season, as it is difficult to harvest and you have to pay double the amount when harvesting in dry season than during the rainy season”
He also noted that it is difficult to preserve the harvested stem of cassava for replanting as farmers get more money from both the tubers and the stem.
Olorunnimodimu said rainy season may not determine this year’s cost of garri because farmers are not able to cultivate enough last year.