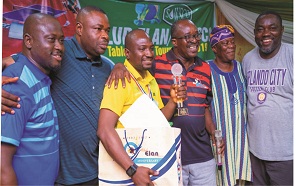 Agbetuyi stated this at the Grand Finale And Dinner Nite to round-off the Table Tennis tournament.

Other clubs that took part in the inter-club competition were Ibadan Tennis Club from Oyo state and Akure Recreation club.

Addressing guests and participants at the ceremony held at the premises of the club in Akure, the Club Elan President, Tokunbo Agbetuyi said the club put together the competition as part of its corporate responsibilities.

Agbetuyi noted that Club Elan in collaboration with SOWSCO Wells Services Nig LTD decided to organise the five-day competition as part of social and corporate responsibility.

He pointed out that the tournament was also targeted at fostering intra and inter social clubs as well as human relationship which was a key element in achieving career and organization successes.

Also Speaking at the event, the Director of Sports of the club, Elano (Prince) Adeyinka Adedire explained that the need to be physically active.

Adedire, who is also a medical expert, appreciated the Patron of the Club, Engr Emmanuel Adewumi, members, past president’s and all members of the club for the energies deployed at ensuring the success of the event.

The Sports Director who lauded the effort of the State government for investing so much political will in the area of sports, commended the Presidents of the four invited Clubs and their teams.