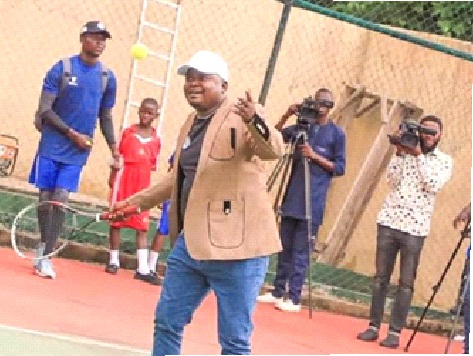 Ologun stated this at the inauguration of Ondo Central Senatorial District Summer Tennis Clinic initiated by the wife of the state governor, Arabinrin Betty Anyanwu Akeredolu.

The 5th edition of the Ondo central senatorial district Summer Tennis Clinic held at Akure Recreation Club Oke Eda featured children between the age of 4 to 13.

The Tennis Clinic which dunked off in Ondo State in 2017 had produced over 500 young tennis graduates who are now doing well in the foot fault game.

The commissioner commended Mrs. Akeredolu for her love for the children. “Her heart of love for the young ones in Ondo state has birthed many programmes, which include among others; the BEMORE Summer Bootcamp, the Summer Tennis Clinic and others which are designed with short and long term positive effects on the children.”

According to him, “already, alumni of the Summer Tennis Clinic such as Agbeje Peace, Henry Aina and Olamilekan Israel have been doing the state proud in the various competitions they have participated.

“I must also thank the Ondo State Governor, Arakunrin Oluwarotimi Akeredolu, SAN, for his support to sporting activities in the state.

“Mr Governor’s support has resulted in the emergence of champions, such as; Odunayo Adekuoroye, Esther Kolawole, John Emmanuel from Ondo state who won medals and did the country proud in the just concluded Commonwealth games in Buckingham.

“I am confident, more stars are still coming too, to do the Sunshine state proud in the game.”

“I therefore, charged parents to give full support to their children/wards in order to excel in any sport activity they choose. This is important because sport has become a veritable tool to eradicating poverty, uplifting the people and empowering the nation,” he said.