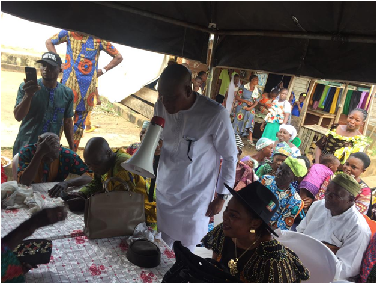 Ondo State commissioner for Environment, Sunday Akinwalire has assured indigenes of Idanre Local government  area of his unalloyed support for them.

This is just as he enjoined the residents to reciprocate the gesture of the dividends of democracy delivered to them by the Akeredolu-led administration.

Akinwalire said this at the empowerment programme he held for indigent women last weekend at Alade-Idanre.

According to him, Akeredolu broke the record of giving Idanre alternative road from the state capital apart from the appointment of Alade indigene as commissioner for the first time.

He said the empowerment initiative was a pay back to the people for their continuous support and also contributing his quota to the good works the current administration in the state is doing.

No fewer than 200 people across the local government were empowered at the event.

This month’s empowerment programme according to the commissioner was targeted at the women in his  local government,

He assured the beneficiaries that they should expect more dividends of democracy and that the programme will cut across other indigenes of the local government in coming months.

He commended Governor Oluwarotimi Akeredolu for his  efforts in making the state a better place and the women crusade led by the governor’s wife, Arabinrin Betty Anyawu-Akeredolu.

Beneficiaries of the programme appreciated the commissioner for his kind gesture and assured him of their continuous support and prayers.