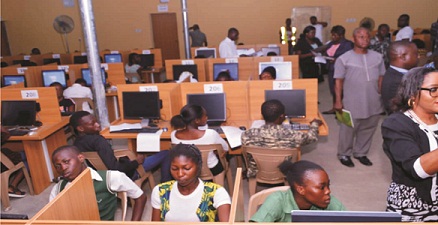 By Bukola Olamona
|
The Joint Admissions and Matriculation Board(JAMB) has  been commended for creating a good standard for the 2019 Unified Tertiary Matriculation Examination (UTME).

Giving the commendation was  Ondo State Commissioner for Education, Science and Technology, Mr Femi Agagu while monitoring the examination in Akure,the state capital.

The Commissioner who was represented by the Permanent Secretary, Rev Akin Asaniyan said JAMB has set a standard for the conduct of the examination especially through various avenues for monitoring the examination by all stakeholders.

The Commissioner said what was seen on grounds  indicated that  JAMB has prepared very well and should be sustained .

According to him:” the Centres are alright, and both the parents and students comport themselves very well,it is highly encouraging, so if JAMB can sustain this level of preparation and even improved upon on  , it will be better”

Speaking on  some centres that were not up to expectation  as regards the environment where the examination took place, Agagu said the lapses is centre based,  and not JAMB’s fault as it has to do with mechanical appliances.

“The gaps are centre based ,you find the generating set fluctuating, that could not be JAMB’ s fault .

” When you are making use of mechanical appliances, we call it law of probability,it could develop fault at any time, even if JAMB came earlier to check on them ,it will still happen,  but we will recommend that there should be back ups for the appliances that  are better than the ones been used, so as to forestall things like this from occuring,  but in our report , we would let them know about it,” he added.

In an interview with the  Supervisor in charge of C.A.C Grammar School,Ondo road center,Zainab Lawal, she  said the examination started  last Thursday and will end tomorrow.

She added that officials of JAMB had been there since 6am so as to screen the students for the examinations.