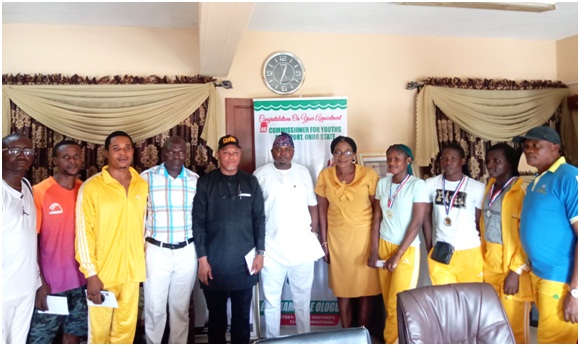 The call for private organisations to join hands with government to develop sports has been yielding result as Jackboxer International USA motivated Ondo State boxers with cash awards.

Ondo State Commissioner for Youth and Sports Development, Mr Bamidele Ologun while presenting the cash awards to individual athletes that done the state proud at the just concluded National Men and Women Open Boxing Championship held in Kaduna reiterated the readiness of the government to partner with more private and individual organisations to develop sports in the state.

He said: “Government cannot do it alone, for this reason we are calling on other philanthropists, private organisation, sports enthusiasts to join hands with us to take our sports to next level.”

The commissioner added that Ondo State government will continue to support and motivate the athletes to give their best at any championship.

Ologun commended their efforts and encouraged them to be more hardworking as the state was preparing for National Sports Festival in Asaba, Delta State.

“We want you to go to Delta and conquer, with hardwork and necessary motivation it’s achievable.”

“I appreciate the management of Ondo State Sports Council, Jackboxer Promotions and the athletes for being good ambassadors of the state.

“Most especially, I thank our Governor, Arakunrin Oluwarotimi Akeredolu (SAN)

for his supports to Sports development in the state,” he said.

Earlier, in his remarks, the General Manager of Ondo State Sports Council, Mr Henry Babatunde, said, he was delighted to lead the team of great ambassadors, who has made the state proud and won medals.

According to him, they need to be appreciated and recognized, that is why Jackboxer Promotions is given cash rewards to the boxers to motivate them.

The CEO of Jackboxer Promotion USA, Ike Enwereuzor Said; I have worked with many promoters and boxers around the global, I realized Ondo State has many undiscovered talents so I decided to come back home, to contribute our quota to the development of the game in the state.

“Our plan was to have monthly boxing show to keep the boxers sharp as national sports festival is fast approaching.”

“We will organize talent hunt that will lead to taking some of the outstanding boxers out of the country to improve their boxing skills.”

The athletes promised they will continue to train hard ahead of the National Sports Festival slated for Delta State later in the year.