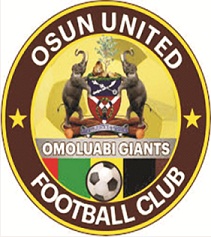 Fisayo Akinduro, Osogbo
|
Players, coaching crew and the management of Osun United have been urged to see the team as their asset and contribute their quota to make it grow.

Commissioner for Sports and Youth Engagement Mr Yemi Lawal gave the advice while hosting the management of the club in his office in Osogbo.

Lawal assured that his vision to transform Osun United has just begun as every plan and policy aimed at strengthening the team has been mapped out while rapid implementation of the plan is underway.

“My duty to develop the youth and sports is one of the avenues for youth development. Osun United is a platform to promote players’ talents beyond here which means all of us should take the ownership of it.

“I have had several meetings, discussions and even arguments with the management in order to make things work out as expected and now the coast is getting clearer.

“My vision is to make the team a toast of all within the short time I will spend in office and that is why I insist on due process in everything we do.

“The glory and success of the team is for everybody hence we all should work in unity and double our efforts to get suitable result.”

He stated that his aim to turn Osun United from being a liability to asset is sacrosanct hence the need for proper contractual agreement by the players.

While saluting the players courage to win their first game, he assured them that their welfare is a priority.

In his remarks, President of Osun United, Chief Ademola Adesina appreciated the commissioner for struggling hard to solve the challenges facing the team and further promised him of the management’s cooperation.

Also speaking, Coach Bright Omokaro maintained that he was confident that the team would do well in the league this season after recording a victory in its first game, with a call on the commissioner to help boost the morale of the players.

Captain of the Omoluabi Giants, Akeem Olalere also appealed to the commissioner to help solve several other challenges militating against the team such as  the bus, poor condition of the pitch as well as other bonuses and allowances of the players.