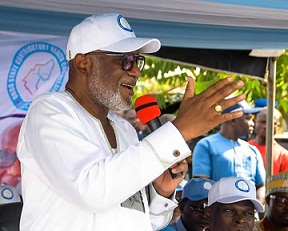 Kemi Olatunde
|
As Ondo state joined the rest of the world to celebrate the International Universal Health Coverage Day yesterday, the state government has assured residents of the state of hearty and affordable health insurance package which will expose them to qualitative health care services without any financial embarrassment.

He explained that the government is responsible for the premium of the vulnerable group(pregnant women and under five children) under the scheme; Abiyamo Maternal and Child Health Insurance Scheme (AMCHIS) which was launched a few days ago in the state capital and added that plans are also underway for the procurement of health insurance cover for people with disabilities.

Describing health insurance as the most effective and evidence based contributory mechanism for health across the world, he noted that the day aimed at raising awareness on the need for strong and resilient health systems and universal health coverage with multi stakeholder partners.

According to him, Universal Health Coverage enables everyone everywhere have access to quality and affordable health care noting that the commitment to health for all should be an investment in humanity, wellbeing and prosperity for everyone.

While reiterating the commitment of the commission in sensitising the public on universal health coverage and also to mobilise political will towards its achievement, he stressed the need for stakeholders to play their roles in ensuring that there is accessible health for all and added that “we must ensure that every person benefits from the human right to health, political leaders have to make the right choices, the rational economic, financial and social choice of universal health coverage.”

Oyenehin who revealed that the commission targets 10 percent of the about 4.6 million population of the state with health insurance cover in its first year of operation, said the premium to be paid especially by both the formal and informal sector will be very affordable saying “we will have a flexible payment service.”

He added that the state insurance policies will run for a year covering a principal enrollee, a spouse and four children and added that both suitable public and private hospitals will serve as providers in all the 18 Local Government Areas of the state.

He appealed to all to procure health insurance plan for their loved ones and added that organizations too should do so for their members.

However, he assured the formal and informal sector of an affordable package in order to guarantee the desired health coverage and called on organised labour to take concrete steps in fast tracking the involvement of public servants in the formal sector plan of the commission.