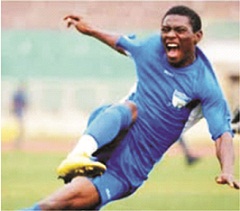 By Femi Atolagbe
|
Ondo state Police Command has confirmed the release of  two footballers Ekundayo Ojo and Benjamin Iluyomade abducted by gunmen  kidnappers on Sunday at Ipele -Ifon on the Benin-Akure highway at Owo Local Government Area of Ondo State.

Speaking to sports reporter in a telephone chat the Ondo State Police Public Relations Officer, (ASP) Leo-Tee Ikoro said “the footballers were rescued by men of the command.”

The PPRO noted that no ransom was paid for the release of the former players of Sunshine Stars of Akure.

In another development, Sunshine Stars Skipper, Abe Sunday, has revealed  that the sum of N2.5m was paid for the release of two footballers, Dayo Ojo of Eyimba Fc and Benjamin Iluyomade of Abia Comets.

Abe was one of the persons that negotiated and delivered the ransom to the kidnappers.

Abe told journalists in Akure that the money was paid in cash to the kidnappers at Elegbeka after Owo local government.

He said he accompanied the two brothers of Dayo, Femi and Sunday, to deliver the money and secured the release of the two players.

Abe said the kidnappers began negotiation from N200m to N2.5m.

The Sunshine FC skipper said the team (Eyimba) contributed N1.5m while the family managed to secure the balance N1m and was taken to the spot where the kidnappers asked them to go.

“They called us around after 4pm on Wednesday that we should come with the money, at times they asked me to send them recharge card. We tried to speak with them on the financial state of the country.

“We negotiated from N100m to N20m before they finally agreed on N2.5 million. Those people have back up in the Army and the Police. They never asked us to drop the money inside the bush; they met with us one on one.

“They asked me to bring the money before they released them, so I don’t know where police rescued them because I don’t like ‘fake news’ we reached Akure around 1am on Thursday (Today).

“But the most important thing is that both of them are alive and are back with their families.”

Meanwhile the National Association of Nigerian Professional Footballers (NANPF), has expressed its joy and happiness over the release of Dayo Ojo of Enyimba football club and Abia Comets’ Benjamin Iluyomade by their captors.

In a statement signed NANPF’s President Tijani Babangida, MON, it remarked that the union is very glad that the players were released by their captors in good and sound health.

It stated: “We are very happy and grateful to God on the release of the footballers. That they were released in good and sound health and have returned to their families is indeed, a reason to be glad and joyful.

“On behalf of the National Association of Nigerian Professional Footballers, home and diaspora, I say a big thank you to the Ondo State chapter Chairman of NANPF and Captain of Sunshine Stars football club, Sunday Abe for the commendable roles he played in the matter, as he worked assiduously with the Nigeria police to ensure the safe release of the players.