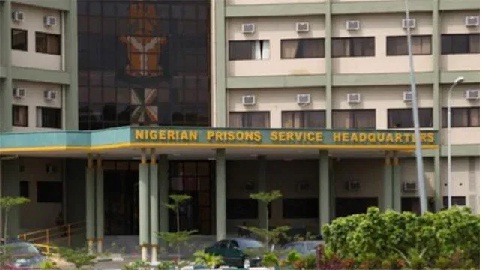 Following the directive of the Controller-General of Nigeria Correctional Centre, Ja’afaru Ahmed to reduce the spread of Covid-19 within the correctional homes, inmates at Olokuta Correctional Centre have been reduced from 1000 to 600
The directive is to reduce congestion in the prisons and prevent the spread of the virus among a large population of inmates
The Hope Metro investigation revealed that the correctional centres in the state do not accommodate inmates for now and that letters have been written to the Chief Judge of the state and the commissioner of police for quick dispensation of justice for those awaiting trial
The effect of the letters was the granting of bail to those that deserve it and keeping others at the police custody across the state
The spokesman if the centre, Fakunle Muyiwa disclosed that” letters have been sent to the Commissioner of police and the Chief Judge in the state for acceleration of bails. Now we the over 1000 inmates have been reduced to 600. But that has not stopped the police from making arrest because they keep them in there cells.
We only have one Prison in Akure, but police cells are numerous. This will not increase crime rate in the state because arrest are still going on from the various commands.”
The Ondo state Commander of The Nigeria Drug Law Enforcement Agency, NDLEA, Mr Haruna Gagara said that the command is affected in so may ways apart from the fact that the courts are on recess, the Nigerian Correctional service at the moment has not being receiving suspects for awhile.
We have been managing our suspects in our custody, those awaiting trial and have not being trailed, are still with us. When the prisons open their doors they will be tried and sent over.
Ondo State Command Police Public Relations Officer,ASP Tee-Leo Ikoro said despite the reduction of inmates accepted in our correctional home due to Covid -19 rules, we will not stop arresting suspects. We have embarked on alternative dispute resolution which have being working very well for us.