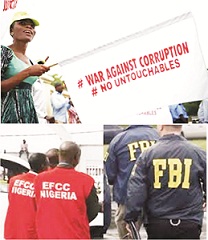 By Comfort Ordia
|
Corruption is Nigeria’s biggest challenge. It’s clear to every citizen that the county has an extremely high level of corruption. Corruption is found in every sector of society. Critical examination of both small and large sectors reveals corrupt practices at every level.

Nigeria, which is the most populated country in Africa, has consistently been ranked high in corruption by Transparency International and other notable organizations that monitor corrupt practices around the world. High corruption rankings affect almost all Nigerians who migrate to foreign countries, as foreigners have the perception that since Nigeria is corrupt, so too are all Nigerians.

But the question that Nigerians have been asking since President Buhari came on board “is President Buhari’s government fighting corruption as he promised during his campaign?” Nigerians are tired as they found out that the government is not really fighting corruption. There are incidences he strongly believes and practices transparency. This is made clear through the words of PDP 2019 presidential candidate, Atiku Abubakar in December 2018.

Corruption in Nigeria hurts a lot of people, as the money that would have been used to reduce poverty in the country is being channeled into the pockets of a select few.

Embezzlement of public funds is common. Many leaders have helped boost the economies of other nations by depositing embezzled money in foreign banks.

As of a few years ago, whenever it was time for an election in Nigeria, children across the country began to go missing. Kidnapping during this period was rampant and parents were usually advised to guard their children against ritualists. But why was it like that and what happened to the kidnapped children?

This is another face of corruption—one that breaks the hearts of mothers. The missing children were used by contesting politicians to perform ritual killings in order to get protection and devilish powers that would enable them to win elections. This is corruption and wickedness in the highest order because it involves the termination of human life. Those who take part in that practice have their own children at home, yet went on capturing and killing the children of others. This practice hasn’t stopped, but it has reduced.

Corruption in Universities and Colleges, it is not news to any Nigerian that corruption is rampant in universities, polytechnics, and colleges. There are certain things that lecturers do that deserve “punishment.” Most lecturers use the opportunities they have to take advantage of others.

Harassments of women by lecturers and pressure to sleep with them are common. The most painful part of it is that some of them are married, yet they are not satisfied. After female undergraduates submit to the lecturers’ requests, they are rewarded with good grades.

How do some students find their way into the universities? Some are there not by merit, but through a kind of bribery called sorting. Some rich men in the country bribe vice chancellors and heads of departments to secure admission for their children. When this kind of dirty practice is conducted, those who would have made it on merit are cheated, as admission will not be offered to them. Every university in Nigeria has a quota (maximum number of students) they can admit each year.

Where do we start when it comes to the nature of corruption observed in the police force? Do we start with bribery, intimidation, sexual harassment of young inmates in prison, or the fact that they turn truths upside down?

There is a saying that “police are your friends” in Nigeria; policemen are your enemies because they can deny the truth and collect bribes to do so. Because of the encounters many Nigerians have had with policemen, even the good ones among them are generalized as being bad. What a shame.

The policemen who work at some checkpoints on the expressways cannot do without collecting bribes from car owners and drivers. Their interest lies in collecting money from drivers and not in securing the road. Bribes become compulsory even when your particulars are in order.

Bus drivers must offer money before they continue with their transportation business, The police are now turning to gods that receive money from the worshippers as an offering.

Corruption is like a curse that’s been laid upon us. Even in football there is corruption. Players are not chosen by merit. It is all about who you know in top political offices or society.

When churches are corrupt, what hope do Nigerians have? The truth is that not all the churches in the country are corrupt. Corruption is witnessed mainly in the “new generation churches.”

Imagine you have been dying of hunger for years and a man claims that you should come to him because he has been called by God, and can transform your financial status. It is a common thing they say to make hungry Nigerians yield to their deceptions. The people come and the so-called pastors use tricks to collect the money in the pockets of the poor.

Fraudulent Internet activity is another face of corruption. Graduates and non-graduates who lack the knowledge and skills to help them earn money found joy in Internet fraud. It is a criminal act and deserves serious punishment.

Among the classes of offences committed in Nigeria, both the Senate and members of the House of Representatives are working hard to see that those caught in such acts face the punishments they deserve.

Are Nigerian Customs really doing the work they are hired to do correctly? The Customs Service of Nigeria is the organization that is authorized to clear goods imported into the country. This group is not free from the menace of corruption.

On many occasions, you must pay bribes to Customs before your goods are cleared. Many containers are held captive by Customs because the owners are not willing to part with the large amount of money being demanded.

Greed has caused a lot of crises in the world, including in Nigeria. It is because of greed that political leaders embezzle the funds they are supposed to use for national development for their own selfish needs.

Poor moral youth empowerment is a contributor to corruption. Internet fraud, sexual harassment by male CEOs, and other bad acts occur because Nigerians lack understanding of the importance of youth empowerment. When parents and governments empower youths both financially and morally, the level of corruption will diminish.

Unemployment is one of the major challenges in Nigeria and does not need much explanation because it has broken the hearts of many citizens. People are pushed into corrupt practices because of the high unemployment rates. An unemployed citizen can indulge in corruption to make money and live better.

Mrs Faith Ebruke said, Nigeria is so corrupt that I have to be looking for change when traveling with my personal car, because I will have to stop by any police check point and give them at least #100, she spoke aloud.

She continued by saying, one time ago I went to see the head of a company that she doesn’t want to disclose on getting there I was asked to wait, waiting for almost an hour a man came to see the same person which I also came to see he wasn’t kept waiting like me because he paid his way in to meet the man, that is corruption.

According to Joseph Promise, just because I couldn’t buy my lectures textbook he gave me carryover in his course that is not fair and it is an “institutional corruption” A similar problem of corruption arises in any institution that depends on financial support from people who have interests that may conflict with the primary purpose of the institution.

She continued, before I got admitted into the present institution where I am how, I was made to pass through a lot including seeking help from one lecturer or the other sending them credit card and sending them huge amount of money just for them to help me secure admission.

Another case of 15 Yahoo boys arrested by EFCC in Imo Hotel raids, this incident came just few weeks after the anti-graft agency from the zonal office in Enugu raided the Okwu-Uratta area of the state capital and arrested 37 suspects, and also seized cars and phones from them as well as Spibat Avenue where 25 suspects were arrested too.

This shows the high rate of internet fraudsters. This corruption that has made way into Nigeria and has settled down can only start it’s  turn around and changes from our leaders because it only a clean man that can identify a dirty man.

It is corruption that has not made the country to grow. It is time Nigerian leaders woke up. When you steal from the country it will always make us stagnant. Let all the country’s leaders say no to corruption.