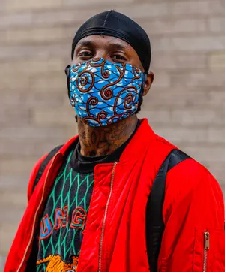 Over 70 offenders have been convicted by Special Court in Ekiti state over non usage of face marsks.
The convicts were arrested by the officials of the Ekiti State Traffic Management Agency (EKSMA) during the first day of the massive crackdown on residents violating the regulation on the compulsory use of face masks in Ekiti State yielded not less than 60 arrests.
All the 70 offenders were taken to a Special Court where they were convicted for kicking against the Ekiti State Coronavirus Disease (Prevention of Infection) Regulations 2020.
A fine of N5,000 was imposed on each of the convicts for their refusal to wear face masks in public in line with the new law to contain the disease.
They were arrested in various parts of Ado Ekiti including Ajilosun, Ijigbo, Old Garage, Okesa, Fajuyi, Adebayo and Basiri.
Speaking on the development, the Chairman of the COVID-19 Task Force, Prof. Bolaji Aluko, said the enforcement would henceforth be a regular exercise urging residents to comply.
He expressed concern why the violators who cannot get a face mask for as low as N100 would now be made to pay a fine of N5,000 upon conviction.
A 23 years old man, Samuel Matthew has been dragged before an Akure Chief Magistrate Court over a-two count charged.
The accused person and others at large were facing a two count charge of Felony and Armed Robbery.
The accused person and the other at large was said to have on 28th of April, 2020 at Seebi junction along Ilseha/Owo Express road Akure in the Akure Magisterial district, did conspired together with others and Armed with dangerous weapons to rob one Temitope Samuel of his red Bajaj motorcycle with Reg No. AKR 468 WQ valued #380,000 after inflicting matcher cut on his hand and back.
According to the prosecutor, Supol Martin Olowofeso, said the offences is contrary to and punishable under sections 1, 2(a), (b) and 6. (a) and (b)of the Robbery and Fire Arms (special provisions) act cap Rll , law of the Federation of Nigeria 2004.
The prosecutor prayed the court to remand the suspect to give the police to conclude their investigations and for justice to prevail.
The Counsel to the accused person Barrister N. G. Okoike pleaded on behalf of his client that the court should tamper justice with mercy.
In his ruling, the Chief Magistrate R. A Olumilua ordered that the accused person should be remanded in Police and his case file be transfer to DPP .
The case was adjourned to 11th of August,2020.