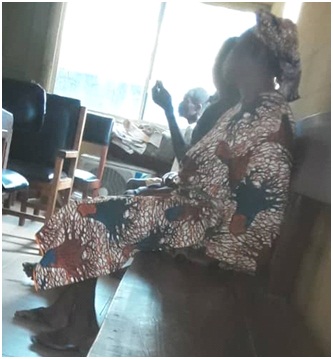 An Akure Magistrates’ Court  has granted bail to Cecilia Idowu, a 55-year-woman who was  arrested for allegedly killing his tenant Stepthen Haruna , with palm-oil and dumping his corpse inside the well.

Recall the woman was earlier arraigned and charged for giving his tenant palm-oil to drink which led to his death, after which she allegedly dumped his corpse in a well.

Magistrate Al-Yunnus  had adjourned till Monday, October 31 for ruling on the remand application sought by the prosecutor.

In his ruling, Al-Yunus, who refused the application, held that there was no probable cause and enough evidence  to remand the woman in correctional centre.

He, however ruled that the defendant should not be released until her bail is perfected, due to the magnitude of the allegation against the woman.

The police arraigned the suspect on two counts of conspiracy and  murder, which she entered a non guilty plea.

It was reported that Celilia, a landlady to the 26-year-old deceased was arrested in her compound on the day she committed the dastardly act at Oke-Igbala Street at Oge area,Okeagbe, Akoko.

Stephen’s corpse was reportedly found in a narrow well in front of her house.

Police prosecutor, Simon Wada, told the court that the woman conspired with others at large to commit the offence.

Wada said the suspect killed Stephen by giving him palm oil to drink in the midnight, which resulted to his death.

He also alleged that thereafter, the woman invited  some people to assist her throw Stephen’s corpse inside the well in her compound.

It was gathered  that an autopsy report showed  that the tenant died after consuming excess palm oil.

Wada said the offence contravene Section 516 and 316 of the Criminal Code Law of Ondo State, 2022

The prosecutor, in an application urged the court to remand the accused at the Olokuta Correctional Centre, Akure pending the insurance of advice from the Directorate of Public Prosecutions

The defence counsel, A. Adedire prayed the court for an adjournment to enable him file a  counter affidavit to the  application sought by the prosecutor.