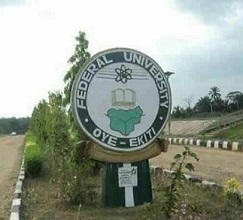 From Victor Akinkuolie, Ado-Ekiti
|
The National Industrial Court sitting in Abuja, the Federal Capital Territory (FCT), has voided the sack of Prof. Adeyemi Oluwagbemiga of the Federal University , Oye Ekiti (FUOYE) by the management of the university.

A copy of the judgement made available to journalists in Ado Ekiti, the Court described the sack of the lecturer in the department of Demography and Social Statistics as illegal, null and void and of no effect.

It thereby ordered his immediate reinstatement and that all payments due for him must be paid with immediate effect.

The suit number NICN/AK/64/2018 between the claimant and Federal University, Oye Ekiti (FUOYE) , as defendant, was filed by Mrs Funmi Falana, T. Gbadamosi and Tolulope Aguda, on behalf of the plaintiff.

Delivering his judgement, Justice O. O. Oyewumi, said the termination of claimant’s employment vide a letter dated 31st October, 2018 from the employ of the defendant is null and void , as well as unconstitutional.

The Judge stated : “that the termination letter is hereby set aside and this shows that the claimant is still in the employ of the university .

“That the claimant is entitled to be reinstated back to his erstwhile position without any loss of seniority, rank and entitlements whatsoever .

“That the defendant is restrained from further interfering with the claimant’s rights, privileges and performance of his duties as an associate Professor in the defendant(FUOYE)”.

The claimant was sacked on October 31, 2018 over alleged refusal to submit a research report to the defendant (FUOYE) , for which they were given money to the tune of one million , six hundred and eighty five thousand naira(N1.685,000).

In the suit , the lawyers to the plaintiff sought a declaration that the claimant’s purported dismissal via letter dated 31st October, 2018 is null and void and unconstitutional .

They also sought a declaration that the claimant is still in the employment of the defendant.

They  craved for an order directing the defendant to reinstate the claimant “to his status as an Associate Professor without prejudice to his entitlements and promotions, which may have accrued to him during the period of his purported dismissal”, the Judge ruled.