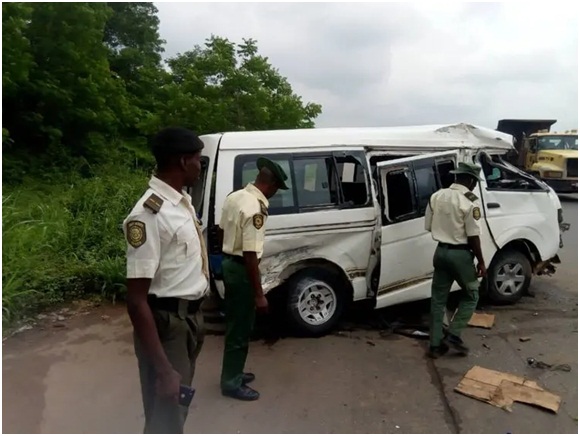 A  Magistrates’ Court  sitting in Araromi Obu has remanded a driver, Blessing Ovie, at the Okitipupa correctional centre for reckless driving that led to the death of an official of the Federal Road  Safety Commission and one other person.

The defendant allegedly drove in a dangerous manner along Lagos/Benin express way at Ajemidele area, Araromi Obu, in Ondo State and crushed the victims to death on May 1, 2022.

Ovie , who was the driver in charge of Toyota Hiace bus with number plate Bayelsa NEV 618 AA, was charged with three count offences.

The police prosecutor, Yekini Muideen informed the court that his reckless driving led to the death of an official of FRSC, Jimoh Albukarim Abiola and one Tunde Thomas.

The charge sheet read in part, “That you, Blessing Ovie “M’ on March 1, 2022, at about 1145hrs along Lagos/Benin express way at Ajemidele area in the Araromi Obu Magisterial district being the driver in charge of a Toyota Hiace bus with number plate Bayelsa NEV 618 AA, drove same vehicle on a public high way, having regards to all circumstances of the case, including the nature and condition which might be expected to be on the highway and drove recklessly

The defence counsel, Uche Abangu, prayed the court to grant his client bail in most liberal terms, promising to provide reliable surety.

He sought for an adjournment and  also resolution between the families of the deceased and the defendant.

However, the prosecutor, Sgt. Muideen, who opposed the bail application, stated that the defendant’s recklessness claimed two lives.

Magistrate  O. F Akinlolu, in his ruling,refused the bail application made by the defence  counsel.

He, therefore, ordered the remand of the defendant at the Okitipupa correctional centre.