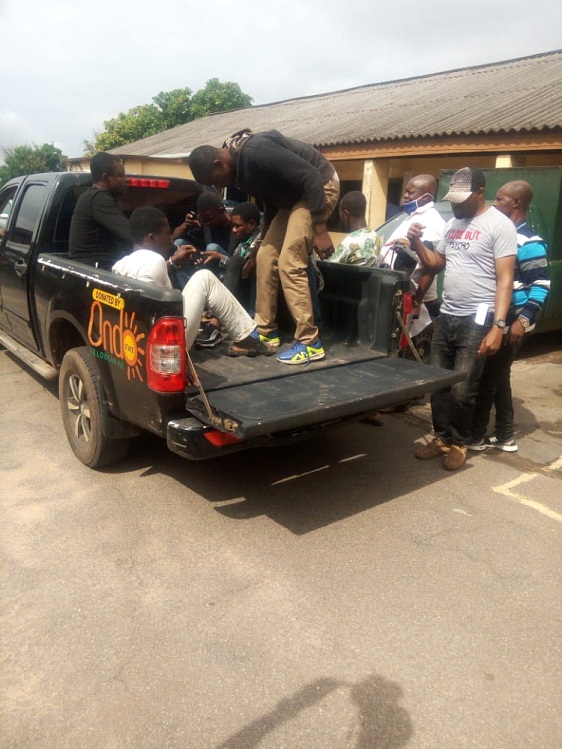 Seven men suspected to be political thugs of the candidate of the Peoples Democratic Party (PDP) in Ondo State have been remanded at the correctional centre Olokuta for being in possession of illegal weapons.
The men were brought before an Akure Chief Magistrate Court on a seven count charge.
The accused persons, Stephen Odalumen, Adesina Tope, Rotimi Johnbull, Sylvester Emmanuel, Adenegan Ifátúnde, Adélékè Sunday and Wilson Isaac, were said to be in possession of dangerous weapons at a campaign rally in Ifon, Ose Local Government Area of the State on September 19, 2020 at about 2.30pm along Ikaro road, Ifon.
According to the Prosecution, the accused persons unlawfully carried the said dangerous weapons to the campaign rally and in the process shot sporadically into the air.
The accused persons were said to have in their possession, a locally made single barrel gun, one locally made double barrel gun and live cartridges, including some dangerous charms.
The charge sheet was read to them, but their plea was not taken.
The charge sheet against each of the accused read, ”That on September 19, 2020 at about 2:30pm at Ikano Road, Ifon in the Ifon Magisterial District, Ondo State did have in your possession, without a license, a firearm to wit: one (1) locally made single barrel gun, one (1) locally made double barrel gun and live cartridges and thereby committed an felony contrary to and punishable under section 3(1) of the Robbery and Firearms (special provisions) Act, Cap. T12, Vol. 14 Laws of the Federation of Nigeria, 2004.
The State Prosecutors, Mrs G. A Olowoporoku H. M Falowo, Mr. A. A Akinbosade, in their separate submissions, said the Magistrate Court lacked jurisdiction to hear the case and that the case should be transferred to DPP.
They drew the attention of the court to the fact that an application had been filed at the court to remand the accused persons at the Nigerian Correctional Service Centre, Olokuta, pending the outcome of the legal advice from the DPP.
Speaking with journalists , representative of the State Attorney General and Commissioner for Justice, Mr A. A. Akinbosade a senior legal officer in the state Ministry of Justice described the incident as ‘quiet unfortunate’ saying the Ondo State Government was not happy with the act.
His words, ”This is not what the people of Ondo State are expecting from our politicians. Ondo State Government will not tolerate such incident and people should know that election is not a do or die affair.”
Counsel to the accused persons, Barrister J. A Saliu, who did not oppose the Prosecutor’s application, pleaded with the court to grant a very short date.
In his ruling, the Chief Magistrate N. B Aladejana, ordered the remand of the accused persons at Olokuta Correctional Service Centre till October 22, 2020 pending the outcome of advice from the DPP’s office.
In a related development, the police have arrested another seven persons who vandalized the bill boards of Governor Oluwarotimi Akeredolu in Idanre.