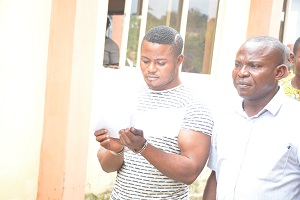 A  33-year-old soldier, Sunday  Awolola, who was alleged to have  molested a female student of Adekunle Ajasin University, Akungba Akoko, AAUA, (names withheld), has been dragged before the Chief Magistrate Court sitting in Akure, the Ondo State capital.

Awolola, who was arraigned on two counts bothering on , however, pleaded not guilty to the charges preferred against him.

The charge sheet had  stated that the defendant committed the offence on July 31, 2019, at about 6:30pm at Akoko Military check point,  contrary to section 357 and punishable under section 358 of the Criminal Code, Cap 37, Volume 1, Laws of Ondo State.

The plea  of the defendant was not taken.

Inspector Adeoye Adesegun, informed  the court of his intention to move an  application on notice.

But the Counsel to the defendant, Mr.  Kayode Idowu, who vehemently opposed the prosecutor’s application, submitted that  he had not been served with any process.

Idowu, therefore, prayed the court to order the defendant to be kept in  police custody pending the time he would  be served and  when the defence response  would be available to the court.

Consequently, the court ordered that since the defendant had a legal representative in the court,  he should be allowed to contact his lawyer to file his response to that effect.

The magistrate,  Mr. Oanipekun,  therefore,  adjourned the case till August 16, 2019, when he said  the remand of the defendant would be considered.