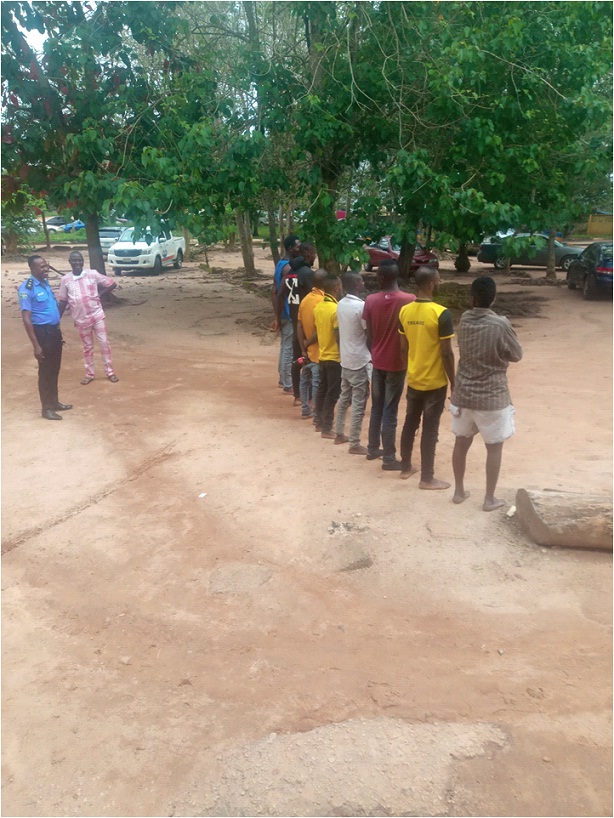 Seven of the eight suspects arrested in connection with a violence at Idanre Local Government area of Ondo State, have been remanded in police custody by Akure Magistrates’ Court.
However, the court remanded one of them, Nweke Chibezie in Olokuta facility of the Nigerian Correctional Service.
They were brought by the police on a seven-count charge bordering on unlawful possession of firearms, wilful damage of billboard bearing the image of the gubernatorial candidate of All Progressives Congress (APC), Oluwarotimi Akeredolu, SAN, valued at N500,000 at Itaolorun and Alade Idanre.
The defendants, Nweke Chibezie, Adeola Taiwo ,Ayoola Ayodeji, Ogunmolu Folajimi, Oluwasola Ojo,Eddy Michael, Agwu Dickson and Akinboni Folashade.
The Prosecutor, Mrs Hellen Falowo, a legal officer from the State Ministry of Justice said the offences alleged to have been committed were punishable under section 3 of the robbery and Firearms Laws Federation of Nigeria, 2004.
She prayed the court to remand the defendants at the Olokuta facility of the Nigerian Correctional Service.
But the defence counsel Adelanke Akinrata, who opposed the prosecution’s application for remand of his clients prayed that they should be kept in police custody instead.
In her ruling, Chief Magistrate Folashade Aduroja, ordered the remand of one of them, Nweke Chibezie at Olokuta and seven others be kept in police custody till next adjoined date
Speaking with reporters, the defense counsel Mr Akinrata, however said that his clients were not criminals, nor political thugs as alleged.
Also the Attorney General and Commissioner for Justice in the state, Adekola Olawoye, SAN, who was also in court said government, will not tolerate breach of peace before, during and after the October 10 governorship polls.